When the world's largest vehicular floating bridge was completed recently at Seattle, a newly built, Cummins-powered vessel—Driftwood II—was on hand to begin serving as the concrete structure's tender.

In addition to the main engines, the Driftwood II is equipped with a Cummins 6B25.9-M diesel, rated at 115 horsepower at 2,500 rpm, for powering a 750-gallon-per-minute fire pump. The main engines are turbocharged and the fire pump engine is naturally aspirated.

The Driftwood II, owned and operated by the State of Washington Department of Transportation, not only is tending the new Interstate 90 floating bridge across Lake Washington but will be assigned to an older floating bridge that will reopen to traffic in 1992 after receiving major refurbishing. The new bridge will be for westbound traffic and the refurbished structure will be for eastbound traffic.

The two floating bridges are anchored alongside each other between Seattle and Mercer Island in Lake Washington.

The 40-ton, blunt-bowed vessel, which has a top speed of about 8.5 knots, was equipped with Cummins 6B Series diesels because these engines have horsepower ratings that fit well with the rpm requirements of the pump jets and fire pump, reported Paul Zankich, Columbia Sentinel's principal naval architect.

"We looked at several manufacturers to see what they had available in that horsepower range," he said.

"We wanted preferably an American- made engine with good availability of parts and service. That particular (Cummins 6B Series) engine satisfied all of those conditions." Among the multipurpose vessel's bridge maintenance duties will be assisting with adjusting anchor cables, flushing bridge drains, maintaining navigation lights and doing other maintenance as needed. The vessel is equipped with a six-toncapacity, knuckle-boom hydaulic crane, pilothouse controls at stations both fore and aft inside the pilothouse and quick-disconnect connections for portable hydraulic and pneumatic tools. 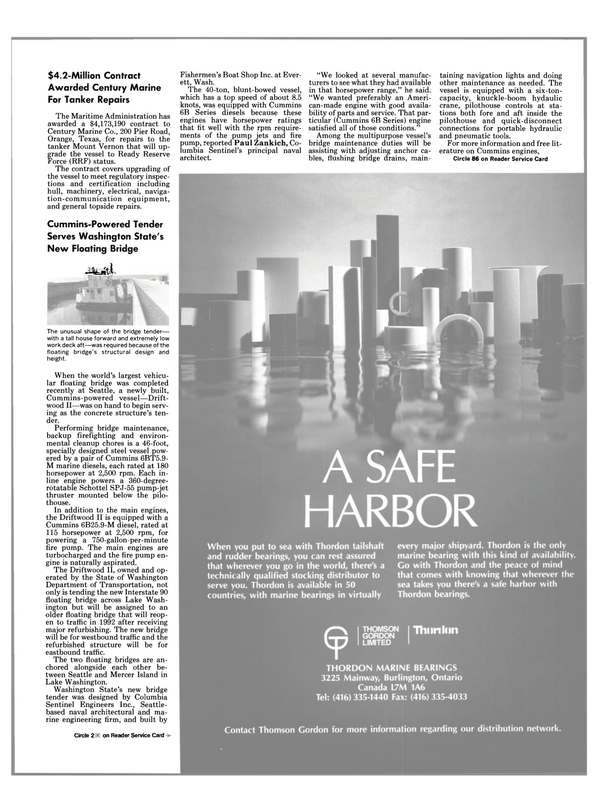