The jumbo hopper barge, built for Falco Line of Vicksburg, Miss., is the first completed of five hopper barges ordered by Fred Farrell and Larry Lambiotte, owners of Falco.

Falco will utilize the 200-foot by 35-foot by 12-foot barge, which is classed by the American Bureau of Shipping, to transport lime on the Mississippi River.

In his pre-launch statements, Robert Greene, president of Jeffboat, applauded the dedicated efforts and quality work of Jeffboat's employees. "We would not be able to celebrate today's launch without the dedication, spirit, and teamwork from each employee," commented Mr. Greene.

Jeffboat's workforce has risen to approximately 240, an increase of 170 since the new construction reopened.

The outlook still appears favorable and it is anticipated that an additional 75 employees could be added by the end of the year.

American Commercial Lines, a subsidiary of CSX Corporation of Richmond, Va., is one of the nation's largest inland marine transportation companies, with affiliates in barging, marine construction, repair and communications.

For free literature giving full information on the facilities and capabilities of Jeffboat, Circle 18 on Reader Service Card 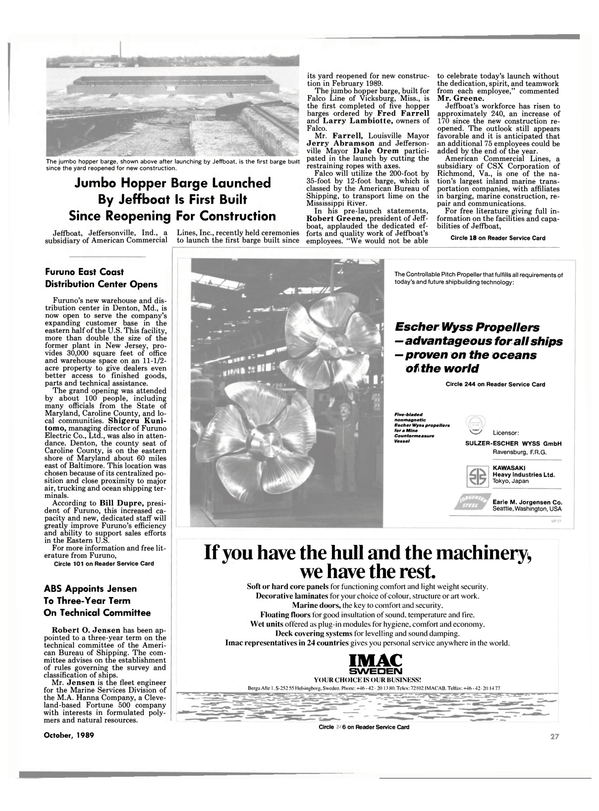