Mr. Blount, president of Blount Marine, is a true innovator in the shipbuilding industry. The new design, the patented Vistarama Class, was under development for over a year. His experience as a builder and an operator led him to believe that the concept of usable space is an essential aspect to a successful dinner/excursion vessel design.

The new vessel, christened the Vista Jubilee, will be operated by Bay Queen Cruises on the Narragansett Bay with her sister ship, the renown M/V Bay Queen. The Vista Jubilee has an overall length of 114, beam of 39 feet 3 inches, and is USCG certified to carry passengers on the climate-controlled deck and one open observation deck. She has been configured for 400 passengers during the dining mode, and can hold up to 600 passengers in the excursion mode.

The unique bow/window configuration and the absence of stanchions, usually found on the first and second decks of boats of similar size, add to the feeling of spaciousness vital to the success of any dinner/ excursion enterprise.

The blessing was provided by Rev.

Marcia L. Blount, executive vice president of Blount Marine, referred to the new Vistarama Class as an "operator's boat" in that it will answer all sensible alterations as suggested and experienced by actual shipboard restaurateurs and tour hosts. Available in lengths of 114 to 145 feet, the Vistarama boasts a 39- foot 3-inch beam, providing the luxury of space so vital to the nature of the restaurant and entertainment business.

The Vistarama Class is designed and certified to carry 450 to 600 passengers on lakes, bays, and sounds, and the final design for the 145-foot vessel may accommodate up to 800.

The daring new design will be offered in two versions, one of which will feature Blount Marine Corporation's patented low ramp, enabling the vessel to dock at any facility as well as make shoreline landings. 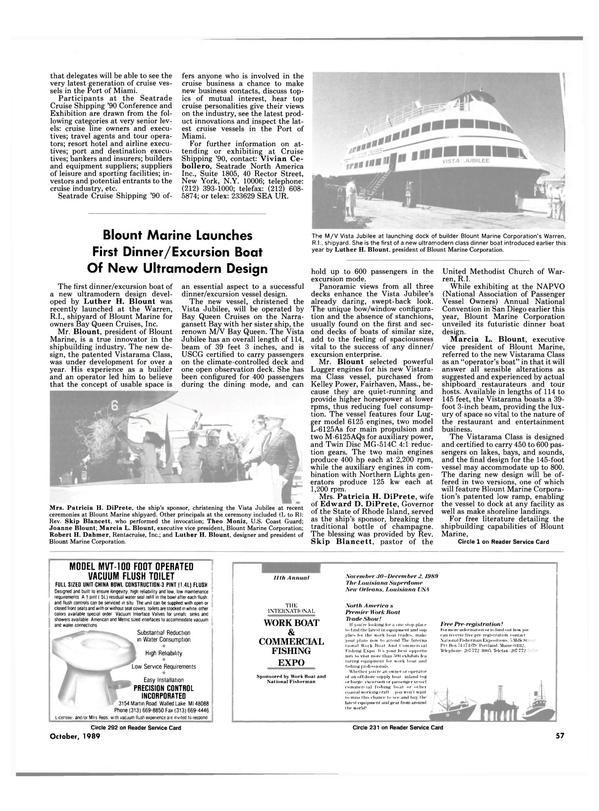