Owners of older models of heavyduty diesel engines often encounter problems in obtaining spare parts because in some cases the original engine builder is no longer in business, or has made a calculated decision to discontinue the design. In either instance, the solutions to the problems have been few. The owner is left to repower, install expensive parts upgrades designed for higher horsepower engine versions, or rely on used and rebuilt components.

One company, Hatch & Kirk, Inc., provides a more cost-effective alternative by offering a wide range of new and fully warranted critical repair parts, including: cylinder heads, liners, pistons, and floating bushing-type connecting rods, all as formerly supplied by the Electro- Motive Division of General Motors for their model EMD 567A and 567B diesel engines.

"During World War II, hundreds of the EMD models 567A and 567B were installed in several classes of U.S. Navy ships. After the war, many of these ships were sold as surplus to commercial operators and friendly foreign navies all around the world, where they continue to operate nearly 50 years after they were launched. Our company has been supplying parts to that fleet since the late 1940s.

"We founded our model 567 parts manufacturing program on the principal that if we are to maintain the viability of this market, we can't rest on 1940's engineering practices.

So, when we see an opportunity to improve a part with modern technology or materials, we will go for it, provided there is no change to form, fit, or function of the item. Our 567B cylinder head, as an example, features the same technology for improved jacket water cooling of the fire deck as we use in our latest "diamond 5" version of cylinder heads for the EMD high output 645 turbocharged and 710 series engines.

"It is a tribute to the original design that there are so many model 567 engines still in service, and by improving the product while keeping repair costs at a minimum, we intend to help keep them running for another 50 years." Hatch & Kirk, Inc., manufacturer of the Cleveland Diesel Engine product line, claims the world's largest diversified engine parts inventory, and specializes in supplying spare parts from stock for many of the older models of engines made by virtually all of the American builders of heavy-duty diesel engines since 1940. 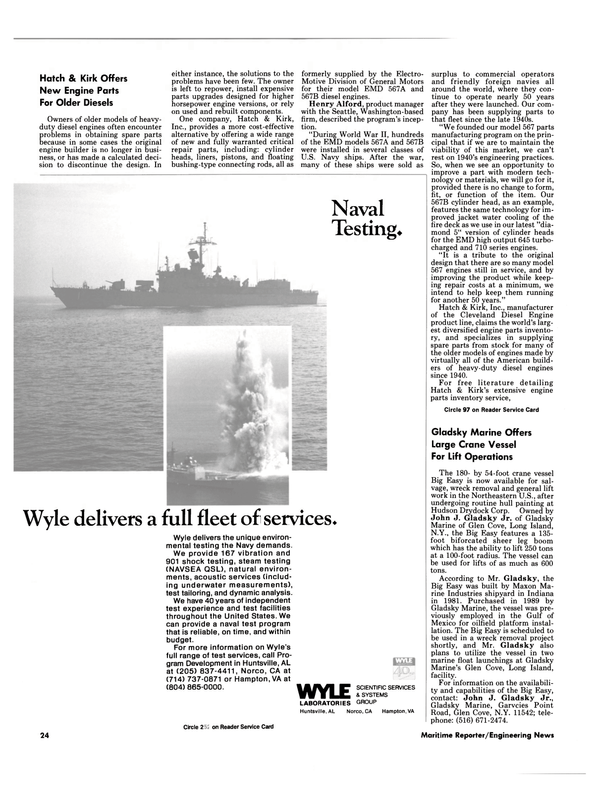