William N. Johnston, former chairman and president of the American Bureau of Shipping and the ABS Group of companies died on September 7, 1989. He lived in Short Hills, N.J., and had retired on October 1, 1987, following 36 years with this 127-year-old international ship classification society.

Mr. Johnston joined ABS in 1951 and served as a surveyor in various locations in Europe for seven years. Transferred back to the U.S. for eight years, he served in many offices before being appointed principal surveyor for New Orleans in 1966. In 1968, he was appointed area principal surveyor for Western Europe and the United Kingdom, with headquarters in London. In 1972, he returned to ABS headquarters to become assistant to the chairman of ABS. He was elected a vice president in 1974, senior vice president in 1976, and president in 1977. Following the retirement of ABS chairman Robert T. Young, Mr. Johnston was elected chairman and president of ABS in 1979.

Mr. Johnston is survived by his wife Kathryn, and three sons, William, Gregory, and Paul, and grandchildren. Condolences can be sent to Mrs. Johnston, 107 Wellington Avenue, Short Hills, N.J.

07078. Mrs. Johnston has suggested that a contribution could be made to a favorite charity on behalf of her husband in lieu of sending flowers. 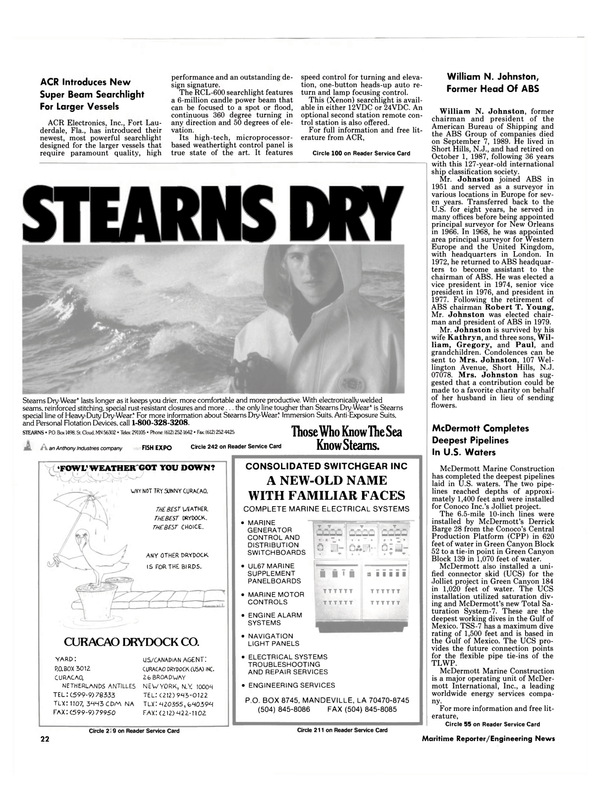