Application For Use Of Foreign-Flag Vessels By U.S. Operator Receives Close Attention By Both MarAd And Congress

The responses to an October application filed with the Maritime Administration (MarAd) by Lykes Bros. Steamship Company have generally not been supportive. Lykes, one of the largest subsidized U.S.- flag liner shipping companies, is seeking permission to replace U.S.-flag vessels in its fleet with ten foreign-flag vessels, while continuing to receive government operating differential subsidies (ODS) for the remaining vessels in the fleet. Some of the responses have strongly opposed the request to permit the subsidized carrier to replace U.S.-flag vessels coming to the end of their subsidizable lives with foreign-built, foreigncrewed ships. However, one U.S.-flag company has supported the request.

C.E. "Gene" DeFries, president of the National Marine Engineers' Beneficial Association, strongly opposed the Lykes application because, if approved, "it would cost hundreds and eventually thousands of vital maritime jobs." In a December 14 letter, Mr. DeFries argued that "this loss of jobs not only would be a crushing blow to men and women who have long served—and serve now in Desert Shield—our nation and our industry faithfully, but it would run counter to the clear agreement, both military and civilian, that our merchant marine manpower base needs to grow not shrink. It would also severely diminish America's sealift capability as many Lykes vessels are highly-useful breakbulk vessels in the extremely short demand in the U.S-flag fleet." U.S.-flag shipping companies, including Farrell Lines Inc. and Sea-Land Service Inc., also criticized the Lykes application.

These shipping companies are concerned about the damaging effects the use of foreign- flag ships might have on the subsidized U.S.-flag fleet.

One representative from Sea- Land summed up a general consensus that MarAd's action on the Lykes request might either help or hurt the prospects for changes to strengthen the operating differential subsidy program.

He noted that granting the application might "simply diminish the prospects of and arguments for any form of ODS to promote and maintain a U.S.- flag, U.S.-manned merchant marine," while rejection might force action necessary to rejuvenate the program.

One U.S.-flag shipping company, American President Lines, Ltd., supported the Lykes application. American President Line based its argument on the precedent set in the early 1980's when MarAd granted extensive waivers to operators of subsidized U.S.- flag bulk vessels to operate foreign- flag bulk vessels in the U.S. foreign commerce in order to renew their fleets. According to American President Lines, "the waivers were grounded on hardship on the applicants deriving from the existing statutory environment in which U.S.-flag operators have virtually no means to acquire new tonnage due to the unavailability of [subsidies] to construct U.S.-built vessels and their inability to acquire foreignbuilt vessels for subsidized operation; the applicant's need for additional business opportunities; and the recognition that by granting the waiver for foreignflag operation, MarAd is promoting the existing U.S.-flag breakbulk fleet." MarAd will review the comments submitted before making any final decision on the Lykes application. The application is also expected to receive close attention from the recently-converted 102nd Congress, already concerned about the capabilites of and necessity for sealift made clear by the extensive military build-up in the Middle East. 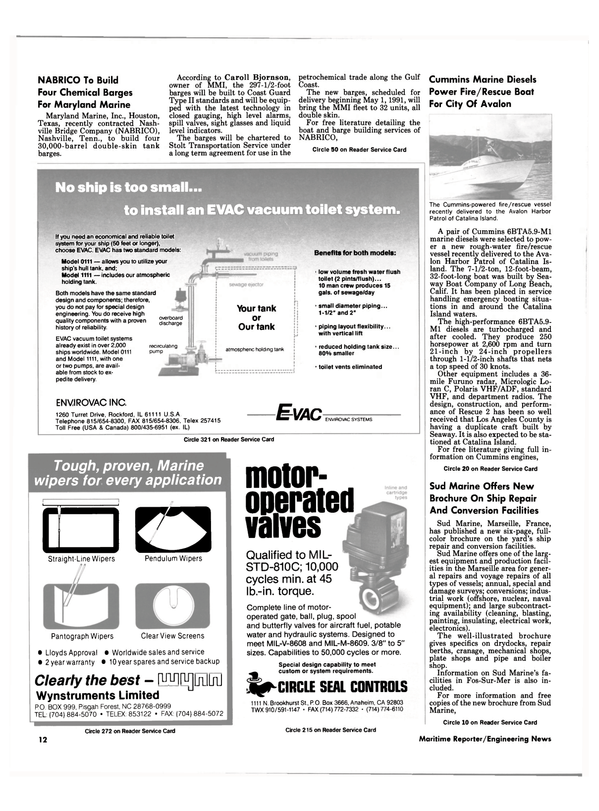 Read Application For Use Of Foreign-Flag Vessels By U.S. Operator Receives Close Attention By Both MarAd And Congress in Pdf, Flash or Html5 edition of February 1991 Maritime Reporter