Conoco To Increase Spending To $2 Billion In 1991

Conoco, Inc., the Houston-based oil firm, recently announced it would increase its capital spending by 25 percent to $2 billion in 1991.

According to company president Constantine Nicandros, Conoco's increased spending is not in response to present high oil prices brought on by the Middle East crisis, but rather on a positive view of the energy industry's economics.

"We do not believe in making decisions based on short-term jumps in price," said Mr. Nicandros.

"Once the crisis ends oil prices will fall back to $20 or so per barrel." Conoco's budget plans for 1991 call for another ultra-deep well and deepwater platform in the Gulf of Mexico. Additionally, Conoco will spend $90 million for two doublehulled tankers now under construction at Samsung Shipbuilding & Heavy Industries in South Korea.

The tankers will be delivered in 1992.

Conoco will also spend $75 million for an offshore water separation system for the Gulf of Mexico.

The remaining 60 percent of the firm's spending will be outside the U.S., in Norway, Ecuador, the U.K.

sector of the North Sea and Indonesia. 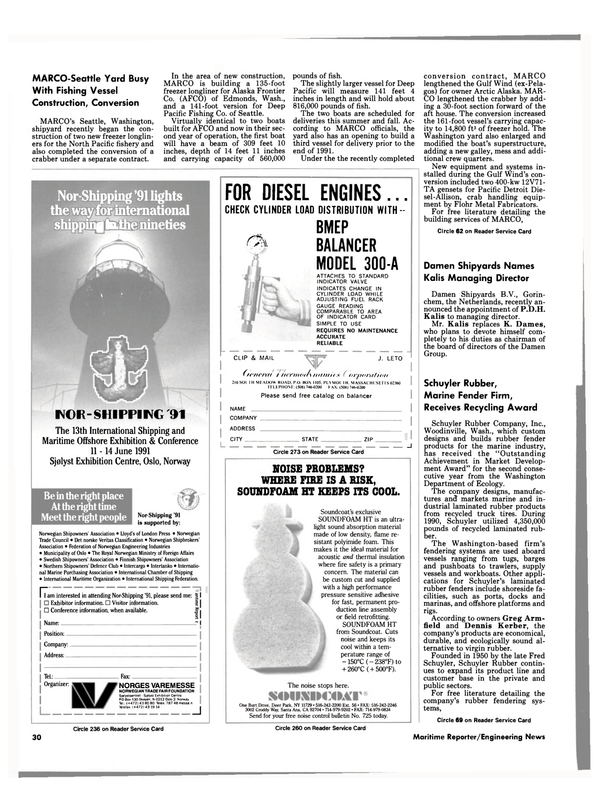 Read Conoco To Increase Spending To $2 Billion In 1991 in Pdf, Flash or Html5 edition of February 1991 Maritime Reporter