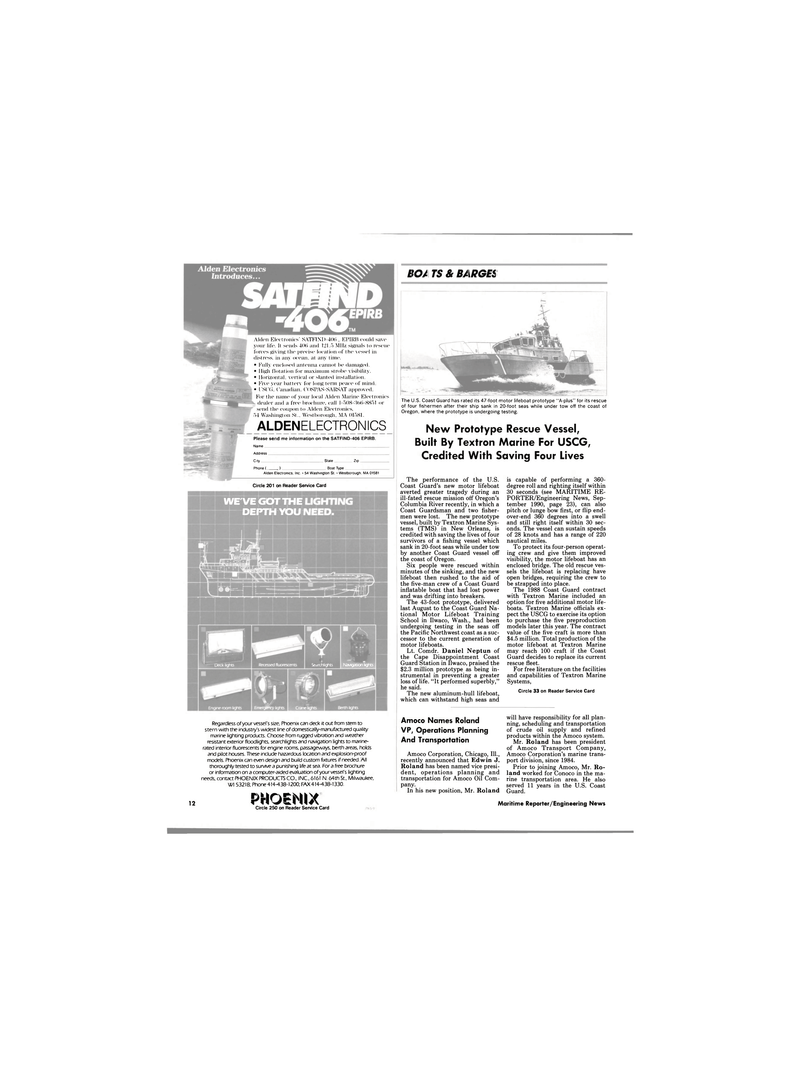 Please send me information on the SATFIND-406 EPIRB.

Alden Electronics' SATFINI) 4()(ilv EPIRB could save your life. It sends 40(5 and 121.5 MHz signals to rescue forces giving the precise location of the vessel in distress, in any ocean, at any time. • Fully enclosed antenna cannot he damaged. • High flotation for maximum strobe visibility. • Horizontal, vertical or slanted installation. • Five year batten for long term peace of mind. • USCG, Canadian. COSI'AS-SARSAT approved.

The U.S. Coast Guard has rated its 47-foot motor lifeboat prototype "A-plus" for its rescue of four fishermen after their ship sank in 20-foot seas while under tow off the coast of

Oregon, where the prototype is undergoing testing.

Built By Textron Marine For USCG,

Regardless of your vessel's size, Phoenix can deck it out from stem to stern with the industry's widest line of domestically-manufactured quality marine lighting products. Choose from rugged vibration and weather resistant exterior floodlights, searchlights and navigation lights to marine- rated interior fluorescents for engine rooms, passageways, berth areas, holds and pilot houses. These include hazardous location and explosion-proof models. Phoenix can even design and build custom fixtures if needed. All thoroughly tested to survive a punishing life at sea. For a free brochure or information on a computer-aided evaluation of your vessel's lighting needs, contact PHOENIX PRODUCTS CO., INC., 6161 N. 64th St., Milwaukee,

The performance of the U.S.

Columbia River recently, in which a

Coast Guardsman and two fisher- men were lost. The new prototype vessel, built by Textron Marine Sys- tems (TMS) in New Orleans, is credited with saving the lives of four survivors of a fishing vessel which sank in 20-foot seas while under tow by another Coast Guard vessel off the coast of Oregon.

Six people were rescued within minutes of the sinking, and the new lifeboat then rushed to the aid of the five-man crew of a Coast Guard inflatable boat that had lost power and was drifting into breakers.

School in Ilwaco, Wash., had been undergoing testing in the seas off the Pacific Northwest coast as a suc- cessor to the current generation of motor lifeboats.

Guard Station in Ilwaco, praised the $2.3 million prototype as being in- strumental in preventing a greater loss of life. "It performed superbly," he said.

The new aluminum-hull lifeboat, which can withstand high seas and is capable of performing a 360- degree roll and righting itself within 30 seconds (see MARITIME RE-

PORTER/Engineering News, Sep- tember 1990, page 23), can also pitch or lunge bow first, or flip end- over-end 360 degrees into a swell and still right itself within 30 sec- onds. The vessel can sustain speeds of 28 knots and has a range of 220 nautical miles.

To protect its four-person operat- ing crew and give them improved visibility, the motor lifeboat has an enclosed bridge. The old rescue ves- sels the lifeboat is replacing have open bridges, requiring the crew to be strapped into place.

The 1988 Coast Guard contract with Textron Marine included an option for five additional motor life- boats. Textron Marine officials ex- pect the USCG to exercise its option to purchase the five preproduction models later this year. The contract value of the five craft is more than $4.5 million. Total production of the motor lifeboat at Textron Marine may reach 100 craft if the Coast

For free literature on the facilities and capabilities of Textron Marine

In his new position, Mr. Roland will have responsibility for all plan- ning, scheduling and transportation of crude oil supply and refined products within the Amoco system.

Mr. Roland has been president of Amoco Transport Company,

Prior to joining Amoco, Mr. Ro- land worked for Conoco in the ma- rine transportation area. He also served 11 years in the U.S. Coast