From E-Biz to E-Bust: Is Online Chartering and Sale and Purchase Possible?

The failure rate for new ventures in cyberspace is very high, and there is no reason to believe that maritime "dot corns" will fare differently. When e-biz companies fail, the reasons often given are lack of invest- ment ("the money ran out") or failure to find a market ("lots of hits on the site, but few buyers"). But those are not causes of failure, those are effects of failure.

Most failing e-businesses fail for the same basic reasons that have sunk non-e-businesses for centuries, such as overestimation of market share, lack of differentiation from competitors and failure to manage vendors and consultants effectively.

But there are two areas, at the heart of maritime business, that have attracted the attention of e-biz entrepreneurs that may well give rise to a new category of failure - failure due to lack of knowledge.

Those two areas are chartering and sale and purchase, or to give them their full titles "on-line chartering" and "on-line S&P." It may seem bizarre to claim lack of knowledge about chartering and S&P when those activities are practiced daily around the world. But no one, including the brokers, knows exactly how successful chartering and S&P practitioners do what they do, and unless those processes can be analyzed and translated into algorithmic frameworks for computer processing, there will be no true online chartering or S&P. There may be lists of ship for sale or charter that will be accessible over the Internet, but that is certainly the smallest part of the negotiating process that results in sales or fixtures.

Further complicating the situation, a large part of the negotiating process has nothing to do with ships or markets. It has, rather, a great deal to do with the psychology and personalities of the parties involved.

So the task of the e-biz developer in these cases is a daunting one. Although the problem is solved every day by people, using intuitive methods that are both complex and little understood, there is no easy way to transfer that ability into cyberspace.

It may turn out that on-line chartering and S&P will never be accomplished, or perhaps more likely, will only be accomplished after a lengthy period of expensive research and development.

But the announced plans of several ebusinesses in on-line chartering and online S&P indicate that the attempt is being made. To those entrepreneurs, the case of IBM and computerized chess may be an eye-opener. About 40 years ago a small group was formed at IBM to devise a computer program to play chess at the championship level. The group included both highly skilled programmers and world-class chess players. At the time it was estimated that the problem would be solved in about five years with the computers then available. The estimates were wildly wrong. The problems encountered were almost intractable, and it took about 35 years before a computer could in fact beat the world champion, and the total cost of the effort was astronomical.

Whether any of the developers who have announced online chartering and S&P have the stomach or deep pockets for even a scaled back effort of this type is not clear.

Perhaps the question to be asked about on-line chartering and S&P is not "how do we do it'?", but rather "why are we trying to do it?" The case for on-line chartering and S&P is not strong; the people involved in day to day chartering and S&P are not struggling to keep up with the work load, nor are they being inundated by more data each day than they can possibly process. While they are certainly being helped by modern communications systems and helpful software to do the job that they do best, it is hard to see how an expensive and time-consuming development process will either help them substantially or, as some have suggested, replace them.

If the people involved in chartering and S&P are not calling for on-line help, who is doing it for them? The answer, of course, is to look to the vendors, the people who sell hardware and software and consulting services. They have solutions to sell and they are very adept at identifying problems, sometimes previously unrecognized, for which they can sell solutions.

There is a long history of high-tech solutions that have been advertised as the ultimate answer, and "on-line" is the latest in the series.

There were innovations, such as linear programming; robotics; artificial intelligence; and many others too numerous to mention. Each of these was hailed at first, and then discarded and finally left to assume its proper place as a useful but not universal tool — so it will be with "online." The preceding was authored by Sydney P. Levine, president. Shipping Intelligence, Inc., New York, N.Y. 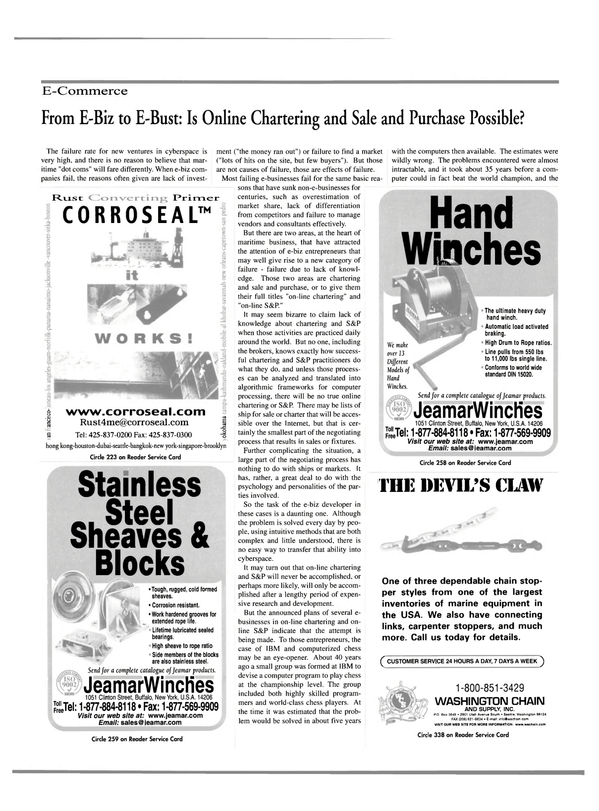 Read From E-Biz to E-Bust: Is Online Chartering and Sale and Purchase Possible? in Pdf, Flash or Html5 edition of October 2000 Maritime Reporter