A splashing debut with new innovations could best describe the inauguration of Celebrity's Millennium, which occurred in England this past summer.

Ironically, the splashing part of the gas turbine-powered vessel's debut is what is now causing headaches at the Miami, Fla.-based company. It seems that the slapping of the water against the vessel's hull is causing excess vibration. Quick to offer a remedy is Newport News Shipbuilding (NNS), which was award- ed the repair contract from Celebrity in August. The company, which brainstormed with Celebrity's executives on September 8 at Kingsmill's conference facilities in historic Williamsburg, Va., will house Millennium at its largest dry- dock from November 18 — following the vessel's New York City debut — until December 13 when it will steam back to its homeport in Fort Lauderdale, Fla. for its regular fall/winter itinerary of Eastern and Western Caribbean cruises.

NNS' director of ship repair, who provided a full update of the project via telephone from the meeting site.

Contrary to popular belief, the myth surrounding the "Millennium mystery" began shortly after its maiden voyage on July 1. There were scattered reports of excess noise and vibration that was supposedly coming from the vessel's innovative gas turbine engines. Rest assured, this is not the case, according to NNS' Stewart, the vibration is the result of water slapping, or wave action against the bottom of the ship's stern hull. In order to reduce this "slapping" noise, NNS. after talks with Celebrity and engineers from the ship's builder, Chantiers de 1' Atlantique, will install sponsons underneath the ship's hull so that the water flow moves in a different way.

As a sidebar to what was discussed at the meeting other than the task at hand, it was decided between Celebrity and NNS how Chantiers would transfer the electronic engineering data to NNS, so that steel fabrication of the sponsons could begin as soon as possible. Once this was determined, Stewart estimated that the scantlings were scheduled to arrive during the week of September 10, followed by the engineering data from Chantiers by the end of the month.

Due to its expansive on-site capabilities, NNS can immediately begin to acquire and fabricate all steel needed for this job prior to the ship's arrival. "If the steel is readily available, we can have it fabricated in a matter of two weeks," Stewart said.

The yard will also be able to piece together most of the steel, as well as position it on the drydock — all from the benefits of having the electronic data prior to Millennium's arrival on November 18. According to Stewart, this benefit shaves off between two to three weeks time that the ship must remain in drydock — time which is especially precious to the itinerary driven cruise industry.

Currently being constructed at Chantiers is Millennium's sistership.

Infinity, which is scheduled for a January 2001 inauguration. Dependent upon how far along the ship is in its building process, Chantiers engineers will either incorporate this new engineering design into the vessel's superstructure, or install them as additional attachments. 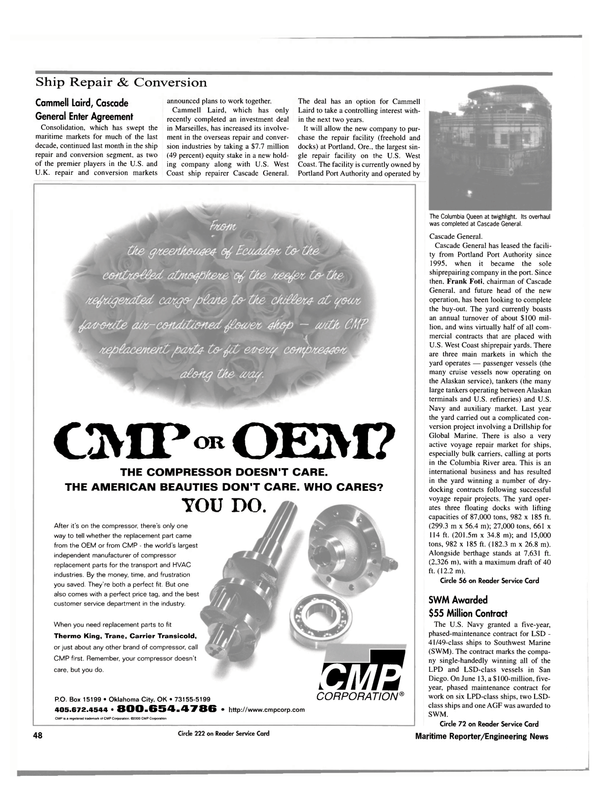