First introduced in early 1993, MarineLine provided the industry with a viable, lower-cost alternative to stainless steel and other types of tank lining material. The latest formulation, MarineLine 784, has been developed to give higher functionality relative to the standard system, in meeting ever-more pressing needs of chemical and products tanker operators.

more costly coating for existing contracts originally specified with the earlier system, at no additional expense to the customer. "While MarineLine 784 production and delivery costs are more expensive than those of our original system, current sales and application costs will be maintained at their existing levels, which have been held since mid-1998," confirmed Don Keehan, APC's chairman. "This will certainly pertain to 2000 and 2001, as we anticipate that our additional manufacturing expenses will be offset by the increased volume of sales generated by MarineLine 784 and the tremendous 'value added' performance it offers," he observed. MarineLine 784 uses the company's breakthrough Siloxirane 28 technology. Its higher functionality means greater resistance to chemical attack, high temperatures and thermal 'shock', plus other advantages. All this promises improved anti-corrosion performance and increased resistance to cargo permeation of the coating.

The first application of the new system was completed in July, involving a 5,300-dwt chemtanker newbuilding in the Netherlands. 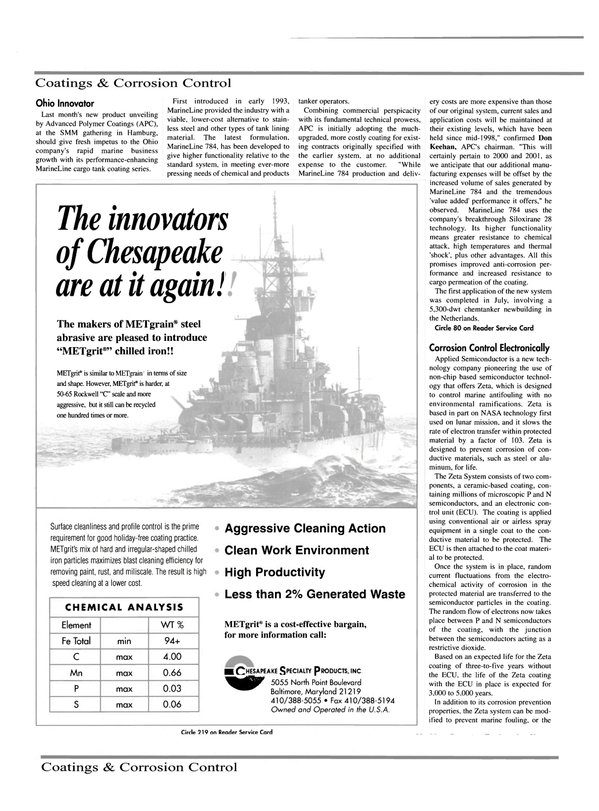