On The Waterfront With NNS' Director Of Ship Repair

Newport News Shipbuilding has been the recipient of several high-profile cruise ship repair projects of late, including the Millennium fix detailed on the previous page. The person responsi- ble for ensuring that the jobs enter and exit NNS' mammoth facilities — on time, and on budget — is a story in itself. Clad in a hardhat and steel-tipped boots, the director of ship repair for Newport News, Va.-based Newport News Shipbuilding is hard at work, supervising a cruise ship that just arrived at the yard for new azipods, inspecting steel fabrication, or walking the wooden planks of the yard's largest drydock making sure all the equipment is strategically laid out for the arrival of an inno- vative cruise vessel. She is Becky Stewart — and she has been with the shipyard for approximately 19 years.

In an industry where high-level positions have traditionally been held by men, Stewart is not afraid to demonstrate her high level of expertise — both on the waterfront and in the office. She kicked off her career in the maritime industry at NNS — subsequent to earning an M.B.A. from the College of William & Mary. Stewart's first job with the yard was in its production engineering department. While there, she gained a first-hand look of what actually occurred on the yard's "waterfront," as she was in the middle of the constant buzz of drydock activity. From there, Stewart moved over to the corporate side of the shipyard, holding positions within Information Services and Corporate Strategic Planning — positions that would provide her with a gamut of understanding as to what happens on both sides of the yard — from the waterfront to the financial end.

Prior to her current position, which she has held for the past two years, Stewart was the director of one of NNS' engineering departments, responsible for life-cycle engineering for various Navy ships (NNS constructs and repairs both Navy and commercial vessels). At that time, she supervised about 400 employees both on the technical and engineering side with the maintenance of these vessels, such as ordering spare parts, and developing video and electronic training.

Just what led Stewart back to the waterfront? Most likely her desire to turn back to her roots that she first planted at the yard during her early days there. "I've always been interested in repair and construction from the waterfront and I wanted to get back to that," she said. "Being directly involved with production is the most exciting part." But that doesn't mean that Stewart wasn't provided with the daily challenges that she now faces on the waterfront while she was on the business side. In fact, Stewart cites her most challenging moments at NNS to date, occurred on that side.

From 1993-1995 when NNS was part of a holding conglomerate of companies owned by Tenneco, Stewart was in charge of consolidating the various companies' data systems into one singular, seamless system that would function as a main data center for all employees from each company. Stewart and her IT team spent many nights and weekends (so that that a company-wide shutdown was not required) drawing up service agreements and reworking computer networks to accomplish the goal of providing Tenneco's companies with one all-encompassing system for better service.

Since her current tenure began, Stewart has managed notable contracts that the yard has been granted dealing with anything from the recent emergency azipod repair on Carnival's Paradise — to the eight-month overhaul of Navy cruiser USS Gettysburg. The latter, which encompassed a workforce of 500 and included two months of prior planning, managed to beat its estimated delivery date by four days.

Training is also on Stewart's agenda, specifically for the newer breed of those entering the maritime industry. "Finding young people is going to be a difficult thing," she said. "With the advent of computers it's getting harder to find those who are going to want to work in the down and dirty business of ship repair." As far as the future of the ship repair business is concerned, Stewart feels that an eventual era of consolidation within the industry is looming. With European and Asian yards luring customers with their lower prices, she feels that this, as well as price-competition is here to stay.

Regarding her time with NNS is a different story however — Stewart is continuing to work diligently to explore further options within ship repair. "In the foreseeable future I will continue to be involved with the ship repair business," she said. "But it's hard to say I wouldn't move to another area of the company within the next three years." — Regina P. Ciardiello 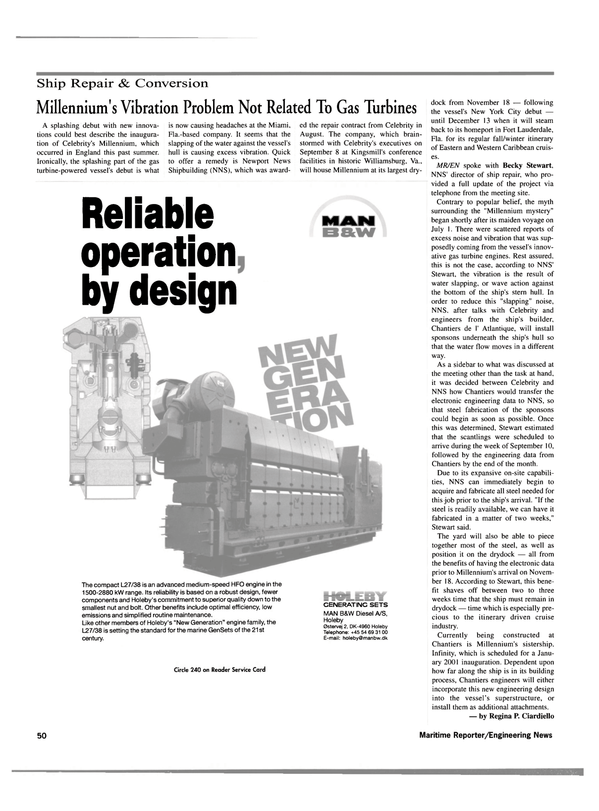 Read On The Waterfront With NNS' Director Of Ship Repair in Pdf, Flash or Html5 edition of October 2000 Maritime Reporter