The crew of Royal Caribbean International's Splendour of the Seas was honored for its heroic efforts in rescuing 11 crew members of a sunken cargo ship in stormy seas.

The crew received the New York Council Navy League's AMVER Award (Automated Mutual-Assistance Vessel Rescue System) at the League's anniversary dinner in New York. Splendour of the Seas is the first cruise ship to receive this award, presented only in those years when a rescue at sea of appropriate significance takes place.

The award, which was accepted by Tor Isak Olsen, captain of Splendour of the Seas, commends a rescue effort on December 16, 1999, after the 250-ft.

(76.2 m) cargo ship, Capricorn, was overtaken by a storm approximately 90 miles northwest of Aruba. Its 12-man crew was forced to abandon Capricorn as it sank in 30-knot winds and 10-ft.

During those events, the U.S. Coast Guard received distress calls and automated distress signals from an unknown vessel — later found to be Capricorn.

Unsuccessful attempts were made to contact the nearest ship in the area. At the same time, the crew of Splendour of the Seas, sailing in the area, saw flares shooting over the horizon and immediately sailed in their direction. Within 30 minutes. Splendour came upon two liferafts holding 11 members of the Capricorn crew, at which time the Splendour crew safely managed to guide them onto the ship. 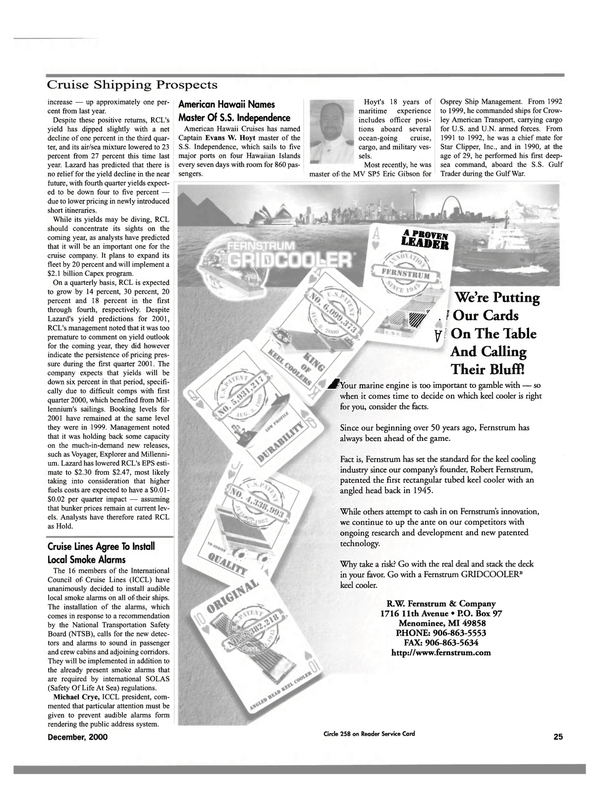