Over the past 30 years, computer-aided ship design and construction has progressed from mainframe computers to PCs, from independent programs to fully integrated programs, and from large shipyards to all sizes of shipyards. More to the point, key advances during the past several years have made 3-D product modeling a tool that can significantly improve small yard efficiency, quality, and profit. However, 3-D product modeling can do these things only if implemented in a planned and well thought-out manner, tailored to the specific yard. 3-D product modeling, when combined with other innovations such as NC production equipment and the workstation approach to production, can make a small shipyard remarkably more competitive than when using traditional methods for new ship construction and major conversions.

Small shipyards, at least those in the U.S. today, are typically faced with tough competition and a shrinking market. In addition, those yards serving the petroleum industry face a cyclical market that wreaks havoc with attempts at maintaining a consistent workload and staff stability.

These yards often use traditional design, engineering, and lofting techniques, though some computer- aided design tools are entering the mainstream, as described in the following section. Traditional construction methods, notably stick building, are the norm. Construction expertise resides not in a computer database, but in the minds of senior foremen, leadermen, and craftsmen. When these people leave a shipyard, their corporate knowledge and shipbuilding expertise leave with them. These yards have small or non-existent internal research and development budgets.

Their management and production personnel are wary of far-reaching innovations, which they perceive to hold risks of disrupting present practices and not delivering improvements to the yard.

Finally, small shipyards' time scales, for example, the time allocated to design, fabrication, or erection, is much shorter than those of the large yards. In these aforementioned yards, a change of several days may be of small consequence, but this may have a large impact on a project in a small yard.

CAD Tools in the Small Shipyard Small shipyards in the U.S. typically implement computer-aided technology on an incremental basis. From the authors' experience, these yards are far behind their European and Far Eastern competitors in the extent to which such technology (and associated production processes) are put into use. Typically, small yards may have some or all of the following computer tools: Word processing (Word); Spreadsheet (Excel); CAD (usually 2D)(AutoCAD); NC cutting machine software; Engineering programs (FastShip for hull design, HecSDS).

Sometimes, data can be transferred between programs. However, each program is usually a separate, self-contained entity with its own database, graphical user interface, software code, and operating procedures.

Unlike 3-D product modeling systems, the above example programs support traditional shipyard processes. The 3-D product model systems can support traditional processes, but their real value comes only when they are used in conjunction with modern shipbuilding processes. Three example shipyards provide compelling evidence of the great advantages that can come from upgrading to 3-D product modeling. All three yards are privately owned and are located in the north of Spain. Table 1 provides information describing the yards, and all tables (on page 47), present overviews of the facilities. All the yards design a wide range of vessels, typically including merchant ships, fishing vessels, tugs, and offshore supply vessels.

Prior to adopting 3-D product modeling, the yards used CAD or manual drafting and full scale or 1:10 scale lofting. Little design information flowed to the workshops, and outfitting was carried out on board the ship. The yards adopted 3-D product modeling, along with improved production processes and upgraded facilities, in steps, as shown in Table 2. The savings in materials and production labor costs, and reduction in schedule are quite astounding, ranging from a savings of 20 to 25 percent in terms of material cost; 30 to 35 percent in terms of production/labor cost; and a 30 to 50 percent savings in hours spent on design. The results are presented in Table 3.

In addition to the savings shown in this table, all yards reported improvement in the quality of production work.

The main reasons for these improvements were more and better information provided to the shops, a drastic reduction of design errors during production, just-in-time information to the shops, pre-outfitting of steel blocks, improved accuracy of materials estimates, earlier availability of bill of materials, automatic generation of information for NC cutting and pipe bending machines, and information available to the planning department. Materials cost savings were realized because of less production rework, less material wastage in steel lofting, less need for piping margin, and shorter piping routes.

It is relatively clear that small shipyards using 3-D product modeling have improved production quality and have realized significant savings in materials cost, labor cost, construction time, and labor hours. While design staff training is straightforward, it may be problematic if the entire staff is trained simultaneously.

The end result, however, is design staff proficiency in product modeling is attained by the end of the design of the first vessel (a modest level of technical assistance by the 3-D product modeling supplier is helpful during this first design).

About the Author Jonathan M. Ross, P.E., is Director of Engineering at Proteus Engineering in Stevensville, MD. He is the North American representative of SENER, Ingenieria y Sistemas, S.A., the developers of the FORAN CAD/CAE/CAM system. 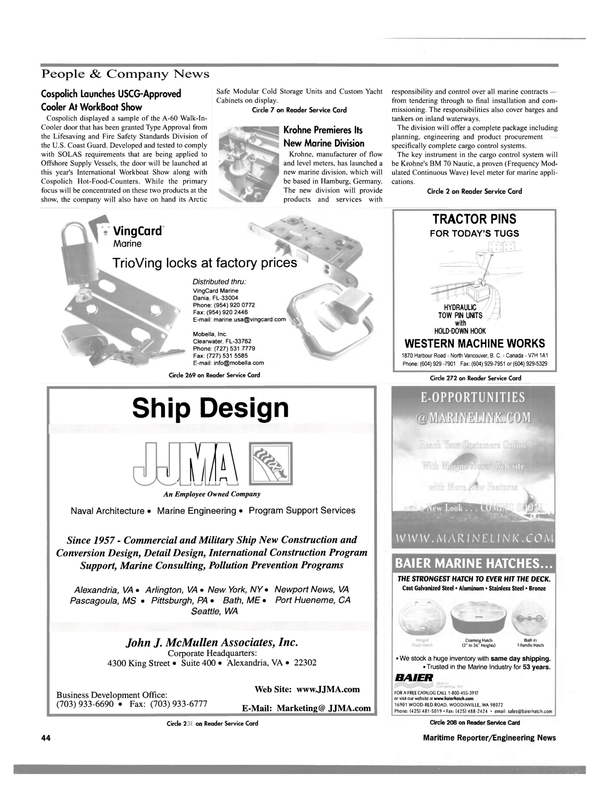