A Pointer to the Future

Developments in vessel powering, propulsion and related systems over the past decade, in particular, have had a fundamental bearing both on maritime technological advance as a whole, and on the ultimate efficiency and competitiveness of shipping in its manifold forms.

The process demands not only a certain scale and the requisite know-how and long-term strategic vision, but also pure industrial will.

Through the endeavors of MAN B&W Diesel's Danish subsidiary, one of the fountainheads of two-stroke technology, a new chapter in ship powering is unfolding with the application of electronic control to a large propulsion plant already in deep-sea service. A true milestone in marine engineering was reached on November 9 when formal Class approval was obtained to run the 14,200-bhp MAN B&W engine of the modern chemical tanker, Bow Cecil, in full electronic mode. By officially sanctioning the switchover from conventional camshaft to a microprocessor-based system of fuel injection and valve actuation, Det Norske Veritas cleared the way for the world's first electronically-controlled two-stroke diesel engine to show its mettle.

The 37,500-dwt Norwegian vessel has accordingly provided a platform for wholesale electronic operation on quayto- quay basis, under the highly demanding trading profile characteristic of a parcel tanker, with its intensive and varied loading and discharge patterns. The potential long-term implications of the 10,000-hour evaluation period that has been signaled by the approval are immense.

Scrutiny of the computer-controlled running functions will help shape future product policy by MAN B&W, which has by far the biggest share of the global market for low-speed propulsion engines. The results will have a signal bearing on whether or not to implement the technology as an option or as a standard feature in the future engine program.

The implementation of the 10,000- hour test schedule at sea, to confirm the efficiency and reliability of the engine and systems, is the new highpoint of an initiative launched by MAN B&W back in 1991. Originally dubbed the 'Intelligent Engine' program, its course has included equipping and extensive testing of the licensor's Copenhagen research engine, the 4T50MX, with electronic controls for fuel injection and exhaust valve operation. The systems have been used continually by the test machine in its wider role as a tool of engine development.

Bow Cecil, one of the Odtjell fleet, was commissioned from the former Kvaerner Floro yard in western Norway during 1998. It had been fitted with a 6L60MC main engine delivered with an ordinary camshaft system, but prepared for retrofitting with the necessary electronic elements. MAN B&W has developed both the hardware and the software which has effectively transformed the MC prime mover into an ME engine, the term now favored by MAN B&W over the original IE (Intelligent Engine) designation.

The systems are fitted on the engine's upper gallery, in parallel with the camshaft, facilitating full changeover from a conventional mechanical system to electronic mode, or vice-versa, within three hours.

The twin engines specified for Concordia Maritime's mould-breaking new class of VLCC under construction in South Korea will also be equipped for subsequent switchover to electronic control. The pair of 314,500-dwt, V-Max newbuilds entrusted to Hyundai Heavy Industries are each to be fitted with two MAN B&W seven-cylinder prime movers based on the S60MC-C type, driving two shaft lines and propellers.

GL: An Undiluted Brand With a buoyant orderbook and solid medium-term prospects favoring the classification society's recent decision to maintain its independence, Germanischer Lloyd has embarked on a new course of business development characterized by closer customer focus.

Rationalization of the organization and an intensification of sales and marketing activities are tenets of the approach. A continuing, substantial commitment to research and development is regarded as pivotal to ensuring the technological strengths widely per- as synonymous with the GL 'brand'.

After several months of deliberations, GL and Det Norske Veritas terminated discussions aimed at far-reaching coopration in maritime activities. During the latter stages of the talks, the German society had feared that it might eventu- ally be subsumed within DNV, contrary to the original strategy of collaboration within an operating framework of retained, distinct identities. Following the slide in GL-classed newbuild deliv eries in 1999 to 1.9 million gt from a level of about 3 million gt in 1998, the current year will reflect a huge recovery in activity implicit in the handover of a total of some 4 million gt of new tonnage built to the society's class requirements.

Over the course of 2000, the Hamburg- based undertaking has expanded its market leadership in the container vessel category, equating to a 52 percent stake of the current orderbook, and also moved into the top slot in the field of multipurpose cargo vessels, with a 37 percent share of the newbuild classification workload. At the time of writing, the society ranked fourth in the global league in terms of its penetration of the world orderbook, accounting for 14 percent of the 67 million gt global tally.

From a maritime perspective, one of the most significant aspects of GL has been its concentration on its core activities over a period that has seen substantial industrial and business diversification by other classification societies.

Around 75 percent of its revenue is derived from the maritime sector, a largely unchanged proportion relative to the picture 10 years ago. Against a backcloth of increased operations, new dimension is being given to the technological base through project leadership of a five-year research effort with the acronym WIPS, translated as 'Competitive advantage through information technology-supported product simulation in shipbuilding'. Drawing in a range of companies and universities besides GL and its specialist areas of know-how, WIPS is addressing the growing capabilities for pre-calculating the performance characteristics of ships and plant, on the one hand, and the increasing IT requirements resulting from concurrent design and construction, on the other. 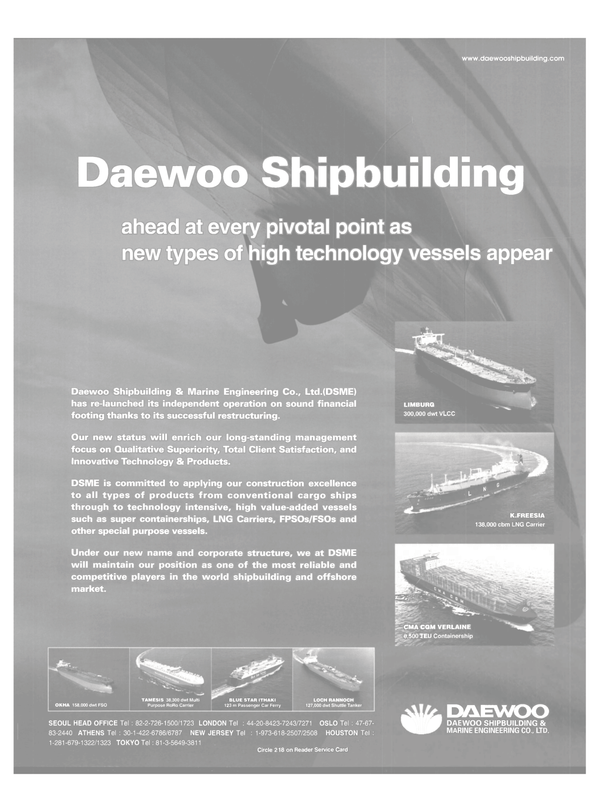 Read A Pointer to the Future in Pdf, Flash or Html5 edition of December 2000 Maritime Reporter