Saving the Castor: Critical Issues Must Be Addressed

While this edition of Maritime Reporter focuses on the quick and successful repair of vessels, an issue which is sure to spur changes in the marine repair market occurred earlier this year when the stricken tanker Castor was unable to find a safe harbor. The ship, which received a 60-ft. crack on its deck plate from a severe storm, was left in limbo for nearly 40 days as Morocco, Spain, Algeria, Gibraltar, Greece, Tunisia and Malta all refused the ship entry into its waters, fearing a potentially catastrophic explosion of its nearly 30,000 tons of gasoline cargo. With the final discharge of all cargo from the damaged tanker Castor, and its pending redelivery by the salvors to its owners for repair, a 39-day saga that has involved eight nations and raised serious concerns within the maritime industry has been successfully concluded.

"It is unfortunate that political intervention into what should have been a purely technical challenge, put so many elements at risk," said Nicolas Hondos, chief executive of Athenian Sea Carriers, owners of the Castor.

While the states refusing admission claimed an imminent hazard, independent scientific analysis of both scenarios clearly showed that the risk of an explosion was minimal and that the potential pollution threat was far worse if the vessel was to sink in deep water.

Throughout the salvage operation ABS, the classification society of record for the Castor stressed the difference between a damaged vessel and one that is substandard. "Since suffering the initial heavy weather damage this vessel has been subjected to an extreme Force 12 gale with wave heights in excess of 8 meters without any further deterioration in its structural condition," Robert D.

"Over the last 39 days it has been towed 1,000 miles across the Mediterranean, remaining intact without losing any cargo or causing any pollution. Only a remarkably robust, well maintained vessel in stout structural condition could withstand such a beating and still deliver its cargo safely," he insisted.

"The facts speak for themselves," said George Tsavliris, a principal in the salvage firm Tsavliris Towage & Salvage.

"The allegations regarding the condition of the vessel were completely without foundation." From a technical point of view the cargo transfer should have been a straightforward operation. "Given the traditional maritime courtesy of access to a sheltered area, this incident would have been over within three days," Tsavliris said. All the parties involved in this incident are fearful that the political treatment of the Castor may become a precedent for future casualties and believe it is imperative that sensible, risk based guidelines on sheltered areas be developed at an intergovernmental level within IMO. These must respect the rights of coastal nations but also provide adequate protection for damaged vessels, their cargoes and their crews. "IMO Secretary general William O'Neil is to be applauded for his swift response in placing this issue on the organization's future agenda," said Somerville. 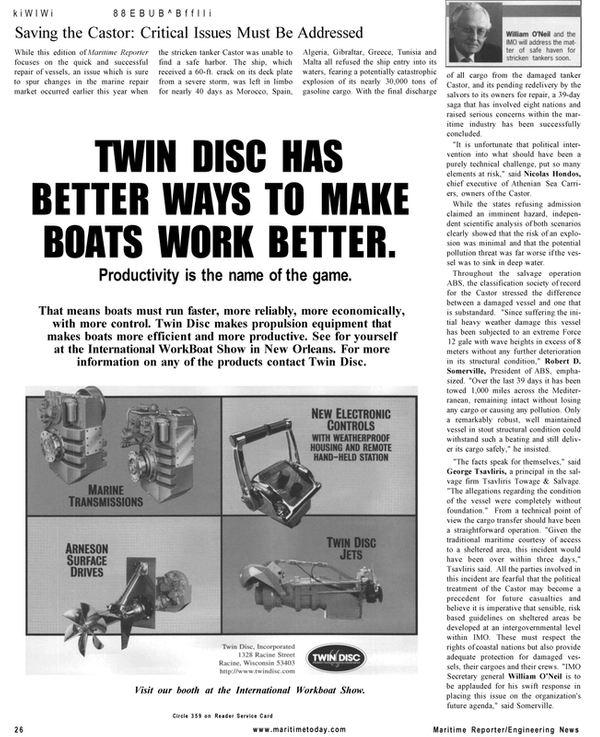 Read Saving the Castor: Critical Issues Must Be Addressed in Pdf, Flash or Html5 edition of March 2001 Maritime Reporter