Miami Diver has led the devel- opment of a unique universal steel habitat to efficiently carry out underwater repairs on almost any ship.

In July 1999. a leading cruise ship operator approached Miami Diver Inc. with a damaged lip type stern seal on one of its vessels. The 73,912-gt ship was reporting sea water ingress from the starboard side shaft seal, and the cruise operator was looking for options to prevent an untimely and expensive unscheduled dry-docking.

This was a unique situation in the underwater bonding of a liptype shaft seal had reportedly never been accomplished before. Miami Diver immediately responded and called upon the network companies based in Vancouver, B.C. Canada and Europe and its subsidiary companies to collectively come up with a feasible option for replacement of the seal underwater.

The biggest challenge in the project was that the cruise ship operator required the repairs to be accomplished without interrupting the vessel's sailing schedule.

The joint efforts resulted in the design and fabrication of a dry habitat to be installed around the starboard shaft to facilitate the replacement and bonding of damaged sealing rings in the dry. The habitat was fabricated from steel in house and was tested for fit up during the vessels port calls in Miami, Fla. On August 2, 1999, Miami Diver in conjunction with the seal manufacturer installed the habitat and successfully replaced and bonded the damaged sealing rings; all work was completed and requested by the ship operator, without interrupting the vessel's schedule.

A second opportunity presented itself in September 2000 as another cruise vessel developed a problem with the pod drive. The 137,276-gt vessel presented a new challenge in that it was fitted with pod propulsion system. Again Miami Diver and its network companies joined forces to design and fabricate a steel habitat for the replacement of the damaged lip-type seal. On November 5, 2000 the habitat was installed and all four lip seals were successfully replaced and bonded in the habitat. The repairs were completed with no interruption of the vessel's schedule.

A diver inspects a seal.

Perfect Fit The benefit to the shipping industry for underwater repairs of this nature was evident. However, the use of a steel habitat did not seem to be a feasible option for the majority of ship owners due to the lead time and expenses required to fabricate a custom habitat for each vessel. The prompted Miami Diver and its network companies to move into research and development of a new universal system capable of fitting the majority of large vessels and portable enough to be mobilized world-wide on narrow body aircraft.

Miami Diver also began to pursue a relationship with B+V Industrietechnik to support the new project and develop strong ties with the leading seal manufacturer.

After several meetings with the network, an agenda to design and develop a complete repair procedure and system was set forth to present to the shipping industry. The key areas for development were the habitat, bonding tools and an underwater carbon arc gouging system for removal of the rope guards and wet welding procedures for the replacement of the rope guards.

Gentry brought a great deal of knowledge and know how as his company works with all stern seal manufacturers.

The new habitat was designed to be lightweight to permit easier and faster installation along with greater mobility for faster mobilization using a wide variety of transportation options. The system for conventional shafts is designed for universal use on a full range of seal arrangement sizes. The small habitat fits seal arrangements from 480 to 670 mm - the large habitat fits arrangements from 670 to 1,000 mm - both are capable of fitting any stern configuration due to flexibility of the material. A dummy shaft and liner were also fabricated to test each new bag for fit and integrity at a depth of 30 ft. of seawater.

Miami Diver conducted the wet welding training and certification for network personnel at its Florida facility, while in-house wet welding procedures were developed and qualified and a training and testing system and welder qualification were put in place with Michael Pett of Hydroweld U.K. using hydroweld FS welding electrodes. The tests were witnessed by six major Classification Societies and the results were a Class "A" wet welding certification.

During the development of the equipment, materials and procedures, Miami Diver and the other network companies sent personnel to B+V Industrietechnik facility in Germany for training and certification in overhaul of Simplex-Seals by bonding.

On September 2, 2001, the new system was installed and tested on the 137,276-gt cruise vessel fitted with a pod propulsion system. A habitat was specially designed for the azipod propulsion system for the test using the same methodology as the conventional shaft habitat.

The tests were conducted as a precautionary operations by the cruise ship operator to ensure the capabilities of the new habitat and to established a time frame for installation, bonding of new seals, and removal Circle 31 on Reader Service Card www.maritimereporterinfo.com 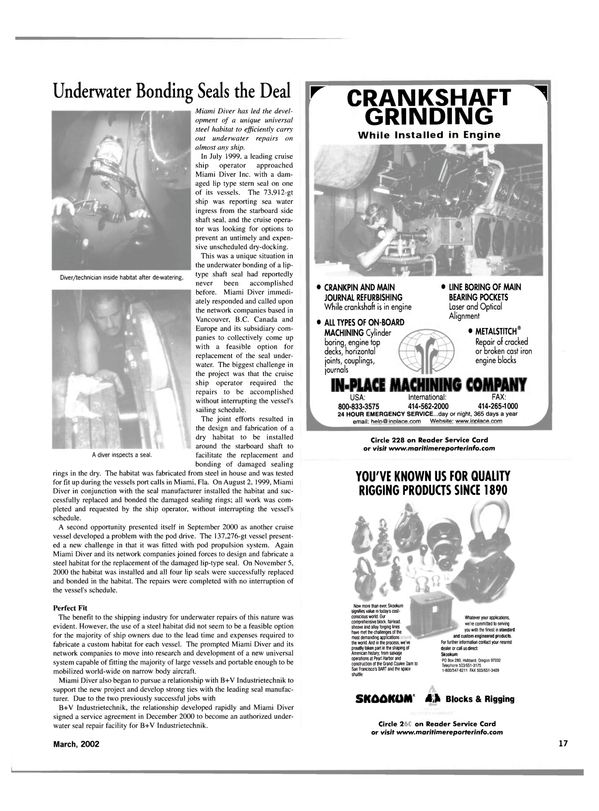 Other stories from March 2002 issue