U.S. Territorial Sea and Other Lines in the Water

Maritime lawyers and others frequently use jurisdictional terms such as territorial sea, navigable waters, contiguous zone, and exclusive economic zone. But what does it all mean? What are the meanings of these terms and how were they acquired?

The modern concept of the territorial sea owes its genesis to Hugo Grotius and his work Mare Liberum (Freedom of the Seas) in 1605. He argued, among other things, that a coastal nation could not claim sovereignty over the seas beyond the range of its control from shore. This concept developed over time into the cannon-shot rule and eventually the three mile rule, the first holding that the coastal nation's sovereignty couldn't extend further than the distance from shore that it could fire a cannon; the second that, for sake of uniformity, the sovereignty of all coastal nations should not exceed three nautical miles offshore. While the majority of coastal nations utilized the three mile rule for many years, acceptance was not universal.

Following some initial opposition to the positions espoused by Grotius.

Britain eventually became the prime supporter of the concept of the freedom of the seas and the concomitant view that the territorial sea for coastal nations should be limited to three n.m. This maritime legacy was carried to the American colonies and adopted by the new government of the United States of America following independence.

In simpler times, the United States had only one territorial sea, which was all things to all people. The nation had.

This changed in 1988, when President Reagan, in response to the increasing threats posed by Soviet spy ships hovering off the U.S. coast, proclaimed a 12 n.m. territorial sea. The proclamation specifically limited its application to international law. The Proclamation left undisturbed the three n.m. territorial sea for all domestic purposes, including law enforcement.

Thus, the Proclamation's only real effect was to require the spy ships to move further offshore. The Proclamation did, though, cause a reexamination of the domestic concept of the territorial sea, resulting in a willingness to deviate from the traditional three mile rule if need be shown.

Territory Defined Subsequently, a number of federal laws have been enacted that utilize the terms of the Proclamation to define the U.S. territorial sea for purposes of that particular statute. The Nonindigenous Aquatic Nuisance Prevention and Control Act of 1990 was the first federal statute to deviate from the traditional three mile limit. It provided that the territorial sea, for purposes of that Act, would be the belt of seas from the U.S.

baseline as determined in accordance with the 1988 Presidential Proclamation. As part of an effort to deter terrorism against vessels and offshore facilities (e.g., oil rigs), laws specifically designed to punish such actions were passed. The measures provided, among other things, that for purposes of those statutes the U.S. territorial sea extended seaward 12 n.m. from the baseline.

The situation became immensely more confused with the passage of the Antiterrorism and Effective Death Penalty Act of 1996. Section 901 of this statute declares that all of the U.S. territorial sea as defined in the 1988 Presidential Proclamation is, for criminal law purposes, part of the United States, subject to its sovereignty, and is within the special maritime and territorial jurisdiction of the United States for purposes of title 18, U.S. Code (the federal criminal code).

The section also amended the Federal Assimilative Crimes Act to include within its ambit the newly expanded territorial sea, while making clear that this expanded area was not within the jurisdiction of the adjacent coastal state. The legislative history of this section is sparse and the goal of Congress in this regard is unclear.

The Ports and Waterways Safety Act was recently amended to add the term "navigable waters of the United States," defined as including "all waters of the territorial sea as described in Presidential Proclamation 5928 of December 27, 1988." This provision expands Coast Guard jurisdiction for purposes of vessel operating requirements, vessel traffic service (VTS) systems, safety zones, many Captain of the Port (COTP) orders, and port access routes, among other things.

waters of an international strait.

The same new term and definition have been added to Subtitle II (Vessels and Seamen) of Title 46 (Shipping) of the U.S. Code Since this subtitle defines Coast Guard jurisdiction over U.S. flag vessels for most purposes and over foreign flag vessels for some purposes, its impact is equally extensive. Measures covered by this expanded authority include: negligent operation, carriage of dangerous cargoes by foreign flag vessels, lightering, uninspected vessels, recreational vessels, load lines, marine casualty reporting, and federal pilotage authorization.

Offshore Security The Maritime Transportation Security Act of 2002 amended the Espionage Act of 1917 to likewise define territorial waters of the United States.

The purpose of this amendment was to allow the Coast Guard to establish and enforce security zones up to 12 miles offshore. There is some question as to whether the amendment achieved the goal as security zones normally are established under the Magnuson Act of 1950.

Several other statutes, though, continue the use of the three mile limit for the U.S. territorial sea. For instance, the Oil Pollution Act of 1990 (OPA 90) defines the territorial sea as "the belt of the seas measured from the line of ordinary low water along that portion of the coast, which is in direct contact with the open sea and the line marking the seaward limit of inland waters, and extending seaward a distance of three miles." The same language is used in the Federal Water Pollution Control Act (FWPCA).

With similar effect, the Death on the High Seas Act refers to the high seas as those waters "beyond a marine league from the shore." Even less clear is the effect, if any, the above legislative changes will have on other measures that rely on the territorial sea and navigable waters concepts, such as the cabotage laws, but fail to include specific geographic limits.

Coastwise trade concepts are, in large measure, tied to the territorial sea, even though the term is not utilized in the various statutes.

Likewise, the authority of the U.S.

Army Corps of Engineers is tied to the navigable waters of the United States.

The statutes do not define these terms, but Corps regulations provide that its basic jurisdiction extends to three n.m.

A contiguous zone extending seaward of the territorial sea allows for the enforcement of customs, sanitation, fiscal.

and immigration laws. The United States adopted and has enforced a 12- mile contiguous zone since the earliest days of the nation.

In 1999, President Clinton issued a Proclamation extending the U.S. contiguous zone to 24 n.m. seaward of the baseline. The avowed purpose was to enhance protection of fisheries resources, but the measure has had little practical effect, since fisheries are largely controlled by means of federal statute.

The proclamation did. though, add to the confusion.

In 1945. with offshore oil and gas drilling becoming more productive.

President Truman asserted jurisdiction over the economic resources of the continental shelf off the U.S. coast. The concept has been assimilated into international law.

It is now defined as the seabed and subsoil of the submarine areas that extend beyond the territorial sea throughout the natural prolongation of the land territory to the outer edge of the continental margin, or to a distance of 200 n.m. from shore, whichever is further.

but not to exceed 350 miles from shore.

Within its continental shelf, a coastal nation has exclusive sovereign rights over all the natural resources of the shelf, including minerals and sedentary living species.

With the increasing efficiency of fishing techniques, depletion of the living resources of the sea became an issue.

The U.S., not unlike other nations, tried a combination of limited unilateral control and multilateral cooperation, but to little effect.

Within the EEZ. the coastal nation has sovereign rights for the purpose of exploring, exploiting, conserving, and managing natural resources superadjacent to the seabed. This includes rights over production of energy from water, currents, and wind and over marine scientific research.

Demarcation lines or boundary lines are established by the U.S. Coast Guard primarily for the purpose of determining where ships are to utilize either the international regulations for prevention of collisions at sea (COLREGS) or the inland rules. The lines, which are shown on navigation charts, are also utilized for other purposes, such as application of the sea-going motor vessel act and the sea-going barge statute.

The above terms are perplexing, but important, as they frequently determine what laws apply to various activities of mariners.

The territorial sea definition, in particular.

remains in flux. Mariners, and others.

will continue to be confused by the boundaries of the United States so long as it claims different territorial seas for different purposes. 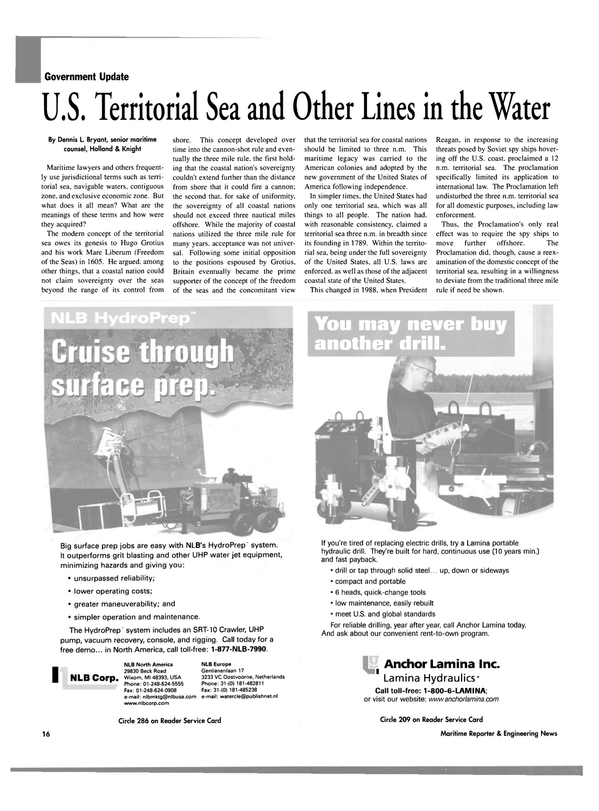 Read U.S. Territorial Sea and Other Lines in the Water in Pdf, Flash or Html5 edition of October 2003 Maritime Reporter

Other stories from October 2003 issue