The top ten cruise lines carried 8.3 million passengers on 3.840 North American cruises in 2003, up eight per- cent over 2002. the U.S. Maritime Administration (MarAd) reported recently. And a recent report in the Wall Street Journal (Tuesday, February 24).

indicates that cruise pricing is on the rise, a positive sign for a sector badly bruised by the fear and fallout following 9/11. as well as a number of high-profile "sick ship" cases.

The highest growth rates among the top 10 departure ports occurred in New York and Galveston, which recorded increases of 45 percent and 39 percent respectively in 2003. However, the traffic remains heavily concentrated at the major departure ports, which are located in Florida. Miami. Port Canaveral, and Fort Lauderdale accounted for 49 percent of the total cruise passenger traffic.

Overall. 72 percent of the total passengers recorded for 2003 chose Caribbean and Bahamas destinations. The figures are part of a statistical series issued quarterly by MarAd on U.S. cruise passenger traffic, with data for the 10 major cruise lines operating cruise ships with a capacity greater than 750 passengers.

With the completion of 2003, MarAd now has available a three-year time series of data on North American cruise passenger traffic. Along with the cruise line and vessel name, the record for each cruise in the database contains the number of passengers carried, sailing date and departure port, destination, cruise length and ship capacity. 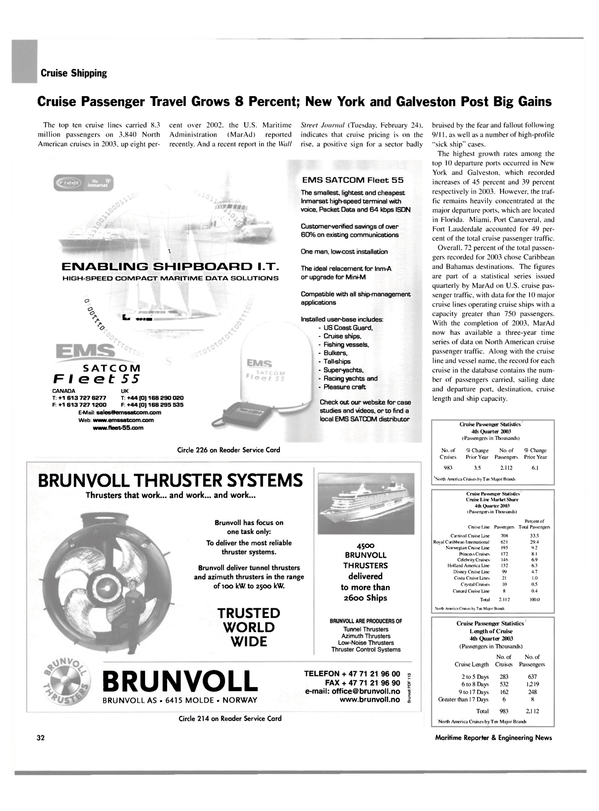 Other stories from March 2004 issue