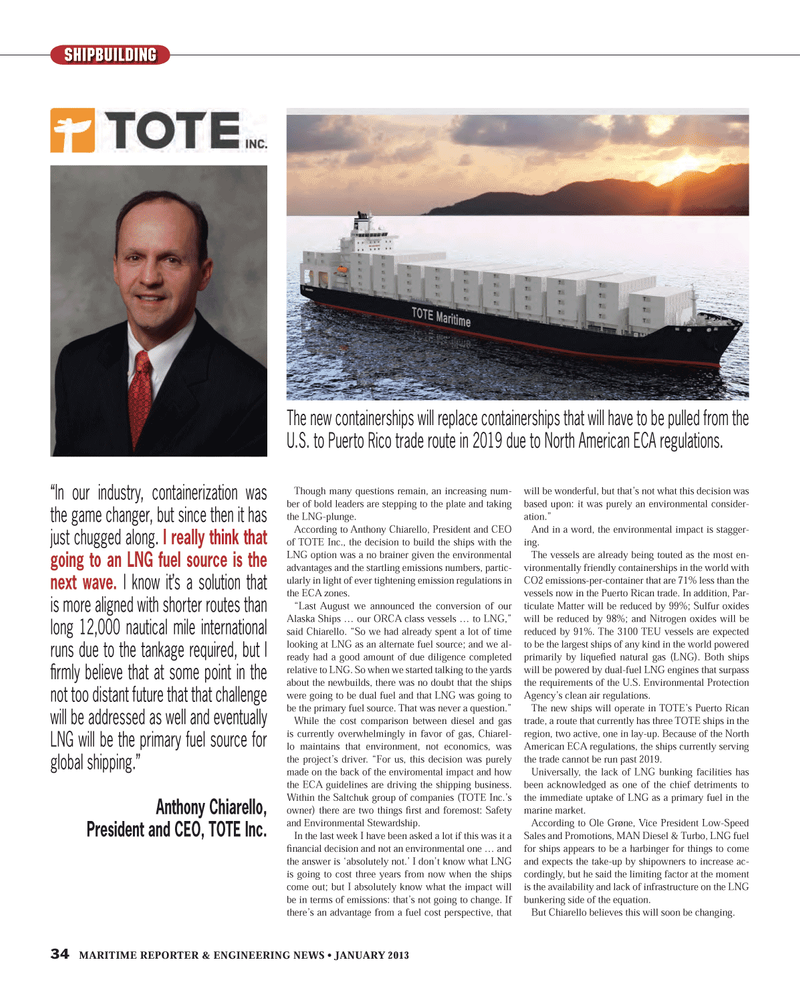 34 MARITIME REPORTER & ENGINEERING NEWS ? JANUARY 2013 SHIPBUILDINGThough many questions remain, an increasing num-ber of bold leaders are stepping to the plate and taking the LNG-plunge.According to Anthony Chiarello, President and CEO of TOTE Inc., the decision to build the ships with the LNG option was a no brainer given the environmental advantages and the startling emissions numbers, partic-ularly in light of ever tightening emission regulations in the ECA zones. ?Last August we announced the conversion of our Alaska Ships ? our ORCA class vessels ? to LNG,? said Chiarello. ?So we had already spent a lot of time looking at LNG as an alternate fuel source; and we al-ready had a good amount of due diligence completed relative to LNG. So when we started talking to the yards about the newbuilds, there was no doubt that the ships were going to be dual fuel and that LNG was going to be the primary fuel source. That was never a question.? While the cost comparison between diesel and gas is currently overwhelmingly in favor of gas, Chiarel-lo maintains that environment, not economics, was the project?s driver. ?For us, this decision was purely made on the back of the enviromental impact and how the ECA guidelines are driving the shipping business. Within the Saltchuk group of companies (TOTE Inc.?s owner) there are two things Þ rst and foremost: Safety and Environmental Stewardship. In the last week I have been asked a lot if this was it a Þ nancial decision and not an environmental one ? and the answer is ?absolutely not.? I don?t know what LNG is going to cost three years from now when the ships come out; but I absolutely know what the impact will be in terms of emissions: that?s not going to change. If there?s an advantage from a fuel cost perspective, that will be wonderful, but that?s not what this decision was based upon: it was purely an environmental consider- ation.?And in a word, the environmental impact is stagger- ing.The vessels are already being touted as the most en-vironmentally friendly containerships in the world with CO2 emissions-per-container that are 71% less than the vessels now in the Puerto Rican trade. In addition, Par- ticulate Matter will be reduced by 99%; Sulfur oxides will be reduced by 98%; and Nitrogen oxides will be reduced by 91%. The 3100 TEU vessels are expected to be the largest ships of any kind in the world powered primarily by liqueÞ ed natural gas (LNG). Both ships will be powered by dual-fuel LNG engines that surpass the requirements of the U.S. Environmental Protection Agency?s clean air regulations. The new ships will operate in TOTE?s Puerto Rican trade, a route that currently has three TOTE ships in the region, two active, one in lay-up. Because of the North American ECA regulations, the ships currently serving the trade cannot be run past 2019.Universally, the lack of LNG bunking facilities has been acknowledged as one of the chief detriments to the immediate uptake of LNG as a primary fuel in the marine market. According to Ole Grøne, Vice President Low-Speed Sales and Promotions, MAN Diesel & Turbo, LNG fuel for ships appears to be a harbinger for things to come and expects the take-up by shipowners to increase ac-cordingly, but he said the limiting factor at the moment is the availability and lack of infrastructure on the LNG bunkering side of the equation.But Chiarello believes this will soon be changing.?In our industry, containerization was the game changer, but since then it has just chugged along. I really think that going to an LNG fuel source is the next wave. I know it?s a solution that is more aligned with shorter routes than long 12,000 nautical mile international runs due to the tankage required, but I  rmly believe that at some point in the not too distant future that that challenge will be addressed as well and eventually LNG will be the primary fuel source for global shipping.?Anthony Chiarello, President and CEO, TOTE Inc. The new containerships will replace containerships that will have to be pulled from the U.S. to Puerto Rico trade route in 2019 due to North American ECA regulations. MR #1 (34-41).indd 34MR #1 (34-41).indd 341/2/2013 1:11:40 PM1/2/2013 1:11:40 PM