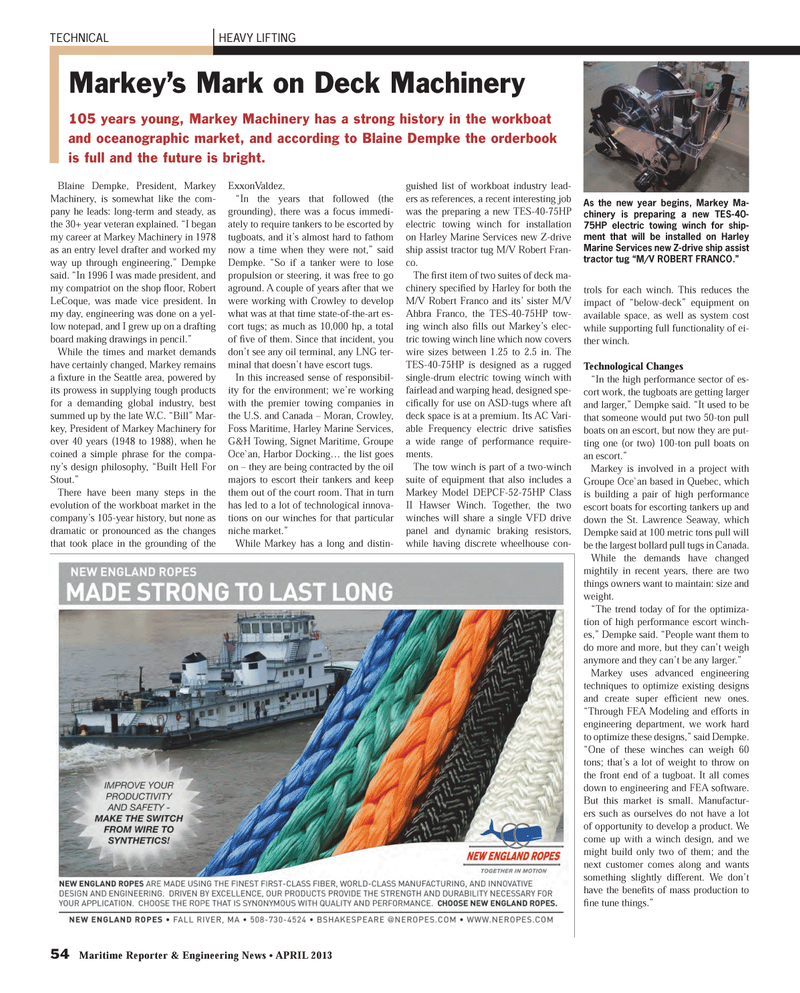 54 Maritime Reporter & Engineering News ? APRIL 2013 Blaine Dempke, President, Markey Machinery, is somewhat like the com- pany he leads: long-term and steady, as the 30+ year veteran explained. ?I began my career at Markey Machinery in 1978 as an entry level drafter and worked my way up through engineering,? Dempke said. ?In 1996 I was made president, and my compatriot on the shop ß oor, Robert LeCoque, was made vice president. In my day, engineering was done on a yel- low notepad, and I grew up on a drafting board making drawings in pencil.?While the times and market demands have certainly changed, Markey remains a Þ xture in the Seattle area, powered by its prowess in supplying tough products for a demanding global industry, best summed up by the late W.C. ?Bill? Mar- key, President of Markey Machinery for over 40 years (1948 to 1988), when he coined a simple phrase for the compa-ny?s design philosophy, ?Built Hell For Stout.? There have been many steps in the evolution of the workboat market in the company?s 105-year history, but none as dramatic or pronounced as the changes that took place in the grounding of the ExxonValdez. ?In the years that followed (the grounding), there was a focus immedi-ately to require tankers to be escorted by tugboats, and it?s almost hard to fathom now a time when they were not,? said Dempke. ?So if a tanker were to lose propulsion or steering, it was free to go aground. A couple of years after that we were working with Crowley to develop what was at that time state-of-the-art es-cort tugs; as much as 10,000 hp, a total of Þ ve of them. Since that incident, you don?t see any oil terminal, any LNG ter- minal that doesn?t have escort tugs. In this increased sense of responsibil-ity for the environment; we?re working with the premier towing companies in the U.S. and Canada ? Moran, Crowley, Foss Maritime, Harley Marine Services, G&H Towing, Signet Maritime, Groupe Oce`an, Harbor Docking? the list goes on ? they are being contracted by the oil majors to escort their tankers and keep them out of the court room. That in turn has led to a lot of technological innova-tions on our winches for that particular niche market.?While Markey has a long and distin-guished list of workboat industry lead-ers as references, a recent interesting job was the preparing a new TES-40-75HP electric towing winch for installation on Harley Marine Services new Z-drive ship assist tractor tug M/V Robert Fran- co.The Þ rst item of two suites of deck ma- chinery speciÞ ed by Harley for both the M/V Robert Franco and its? sister M/V Ahbra Franco, the TES-40-75HP tow- ing winch also Þ lls out Markey?s elec- tric towing winch line which now covers wire sizes between 1.25 to 2.5 in. The TES-40-75HP is designed as a rugged single-drum electric towing winch with fairlead and warping head, designed spe-ciÞ cally for use on ASD-tugs where aft deck space is at a premium. Its AC Vari- able Frequency electric drive satisÞ es a wide range of performance require-ments. The tow winch is part of a two-winch suite of equipment that also includes a Markey Model DEPCF-52-75HP Class II Hawser Winch. Together, the two winches will share a single VFD drive panel and dynamic braking resistors, while having discrete wheelhouse con-trols for each winch. This reduces the impact of ?below-deck? equipment on available space, as well as system cost while supporting full functionality of ei-ther winch.Technological Changes ?In the high performance sector of es-cort work, the tugboats are getting larger and larger,? Dempke said. ?It used to be that someone would put two 50-ton pull boats on an escort, but now they are put-ting one (or two) 100-ton pull boats on an escort.?Markey is involved in a project with Groupe Oce`an based in Quebec, which is building a pair of high performance escort boats for escorting tankers up and down the St. Lawrence Seaway, which Dempke said at 100 metric tons pull will be the largest bollard pull tugs in Canada. While the demands have changed mightily in recent years, there are two things owners want to maintain: size and weight.?The trend today of for the optimiza-tion of high performance escort winch-es,? Dempke said. ?People want them to do more and more, but they can?t weigh anymore and they can?t be any larger.? Markey uses advanced engineering techniques to optimize existing designs and create super efÞ cient new ones. ?Through FEA Modeling and efforts in engineering department, we work hard to optimize these designs,? said Dempke. ?One of these winches can weigh 60 tons; that?s a lot of weight to throw on the front end of a tugboat. It all comes down to engineering and FEA software. But this market is small. Manufactur- ers such as ourselves do not have a lot of opportunity to develop a product. We come up with a winch design, and we might build only two of them; and the next customer comes along and wants something slightly different. We don?t have the beneÞ ts of mass production to Þ ne tune things.? TECHNICALHEAVY LIFTING Markey?s Mark on Deck Machinery 105 years young, Markey Machinery has a strong history in the workboat and oceanographic market, and according to Blaine Dempke the orderbook is full and the future is bright. As the new year begins, Markey Ma-chinery is preparing a new TES-40- 75HP electric towing winch for ship-ment that will be installed on Harley Marine Services new Z-drive ship assist tractor tug ?M/V ROBERT FRANCO.?MR #4 (50-57).indd 54MR #4 (50-57).indd 544/3/2013 1:42:35 PM4/3/2013 1:42:35 PM