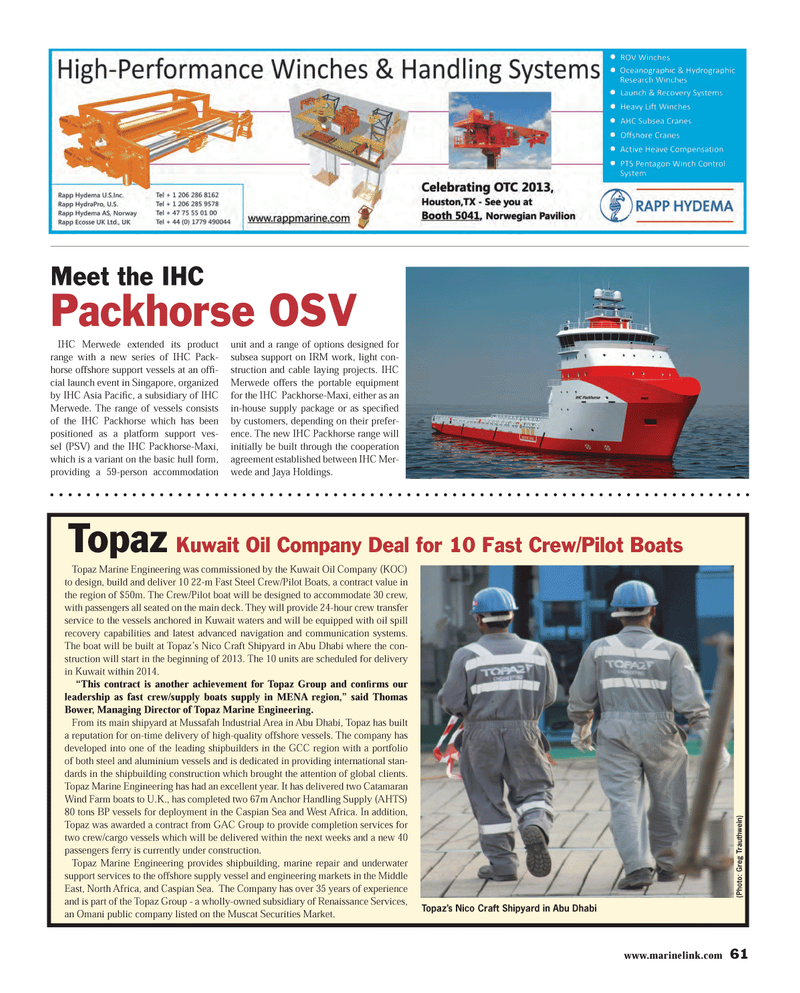 www.marinelink.com 61IHC Merwede extended its product range with a new series of IHC Pack-horse offshore support vessels at an of Þ -cial launch event in Singapore, organized by IHC Asia Paci Þ c, a subsidiary of IHC Merwede. The range of vessels consists of the IHC Packhorse which has been positioned as a platform support ves-sel (PSV) and the IHC Packhorse-Maxi, which is a variant on the basic hull form, providing a 59-person accommodation unit and a range of options designed for subsea support on IRM work, light con-struction and cable laying projects. IHC Merwede offers the portable equipment for the IHC Packhorse-Maxi, either as an in-house supply package or as speciÞ ed by customers, depending on their prefer- ence. The new IHC Packhorse range will initially be built through the cooperation agreement established between IHC Mer- wede and Jaya Holdings. Meet the IHC Packhorse OSVTopaz Kuwait Oil Company Deal for 10 Fast Crew/Pilot Boats Topaz Marine Engineering was commissioned by the Kuwait Oil Company (KOC) to design, build and deliver 10 22-m Fast Steel Crew/Pilot Boats, a contract value in the region of $50m. The Crew/Pilot boat will be designed to accommodate 30 crew, with passengers all seated on the main deck. They will provide 24-hour crew transfer service to the vessels anchored in Kuwait waters and will be equipped with oil spill recovery capabilities and latest advanced navigation and communication systems. The boat will be built at Topaz?s Nico Craft Shipyard in Abu Dhabi where the con- struction will start in the beginning of 2013. The 10 units are scheduled for delivery in Kuwait within 2014. ?This contract is another achievement for Topaz Group and con Þ rms our leadership as fast crew/supply boats supply in MENA region,? said Thomas Bower, Managing Director of Topaz Marine Engineering. From its main shipyard at Mussafah Industrial Area in Abu Dhabi, Topaz has built a reputation for on-time delivery of high-quality offshore vessels. The company has developed into one of the leading shipbuilders in the GCC region with a portfolio of both steel and aluminium vessels and is dedicated in providing international stan-dards in the shipbuilding construction which brought the attention of global clients. Topaz Marine Engineering has had an excellent year. It has delivered two Catamaran Wind Farm boats to U.K., has completed two 67m Anchor Handling Supply (AHTS) 80 tons BP vessels for deployment in the Caspian Sea and West Africa. In addition, Topaz was awarded a contract from GAC Group to provide completion services for two crew/cargo vessels which will be delivered within the next weeks and a new 40 passengers ferry is currently under construction.Topaz Marine Engineering provides shipbuilding, marine repair and underwater support services to the offshore supply vessel and engineering markets in the Middle East, North Africa, and Caspian Sea. The Company has over 35 years of experience and is part of the Topaz Group - a wholly-owned subsidiary of Renaissance Services, an Omani public company listed on the Muscat Securities Market. Topaz?s Nico Craft Shipyard in Abu Dhabi (Photo: Greg Trauthwein) MR #4 (58-65).indd 61MR #4 (58-65).indd 614/4/2013 3:44:19 PM4/4/2013 3:44:19 PM