Blowing in the “Vind”

Vindskip that is, a new ship shape claiming 60% Fuel Savings

Norway is no stranger to maritime innovation, as the small Scandinavian country with a population just north of five million (according to most recent statistics from the World Bank) has a strong historical and current affinity towards anything to do with the sea. In addition, Norwegians are traditionally a population that considers environmental matters a top concern, so it’s little surprise to see continued commercial maritime innovation emanating from Norway.
Project Vindskip is a hybrid merchant vessel for sustainable sea transport. Vindskip from Lade AS is a patented hybrid merchant vessel designed for sustainable sea transport. The designer claims potential fuel and emission savings of 60% and 80% respectively, courtesy of the highly unusual hull shape that is designed to essentially act as an air foil, propulsion power augmented with LNG fuelled electric generators.
Ship types that are particularly relevant to the Vindskip design are the so-called dry cargo ships type such as RoRo, RoPax, PCTC, passenger and container ships, according to Terje Lade, Manager, Lade AS. It’s designer claims that the new design meets all MARPOL Annex VI regulation requirements, as well as the new chapter 4 to Annex VI on regulations pertaining to energy efficiency.

The Idea
The relative wind is a crucial factor in designing aircrafts, trains, propellers and sailing boats. But for the design of commercial vessels, the designer claims that  this is a revolutionary way of thinking. Inspired by the aerospace industry and the sailboat environment, the Vindskip is designed to utilize wind for propulsion, with a unique shape of the hull, both above and below the water line.
Through a computerized weighting of a steady flow of meteorological information, a computer program can calculate the best route taking advantage of the available wind energy. This makes it easy for the captain of Vindskip selecting the best course to propel the ship.
The  Vindskip hybrid merchant vessel concept is designed to generate an aerodynamic lift giving a pull in the ships direction, within an angular sector of the course. This is Vindskip’s Wind Power System. The relative wind, measured on board a ship, is given by the ships course and speed and the direction and strength of the True Wind, according to Lade. With an LNG-electric propulsion system as well, starting the ship from zero up to the desired speed, the aerodynamic lift now generated can be exploited to generate pull and thus saving fuel, forming a dynamic system that maintains a constant speed of the ship.
The Dynamic Propulsion System of Vindskip comprises:
•    The Wind Power System. The Wind Power System will give a varying positive contribution to the propulsion of the ship in period of time.
•    Computer program calculating the available wind energy. Using computerized weighting of meteorological data, a computer program calculates the best sailing route to exploit the available wind energy potential. Thus making it easy for the captain of the Vindskip to harness this energy to propel the ship.
•    Cruise Control. Over time, the contribution of the ship’s Wind Power System to the actual propulsion of the ship will vary. However, the Cruise Control will balance the LNG-electric propulsion system so that it works as a dynamic entity together with the Wind Power System keeping a constant speed of the ship. By firstly adjust the pitch on propeller and then the rpm, it will make it possible to obtain a lower fuel consumption.
•    Relative wind (Apparent Wind) - true wind (True Wind). True wind is the wind measured on board a stationary ship. When the ship starts moving, the so-called relative wind is being generated: The apparent wind measured on board a ship.  The Wind Power System of Vindskip utilizes this Apparent Wind and generates a positive force in the longitudinal direction of the ship as a function of the angle of attack.

Lade AS
Lade AS (Alesund,Norway) was established in 2010 to develop the project Vindskip. A state-of-the-art design as per 2012 is holding both a Norwegian Patent and a WIPO PCT International Patent on the concept. Project Vindskip is a hybrid merchant vessel for sustainable sea transport. Through an innovative concept, it is meeting tomorrow’s demands for fuel economy and emission control with today’s technology. Fuel savings is estimated to 60%, reduction in emission 80%. Now offering this revolutionary innovative design to consultancies, ship owners and ship yards for licensing.
E: terje@ladeas.no
www.ladeas.no 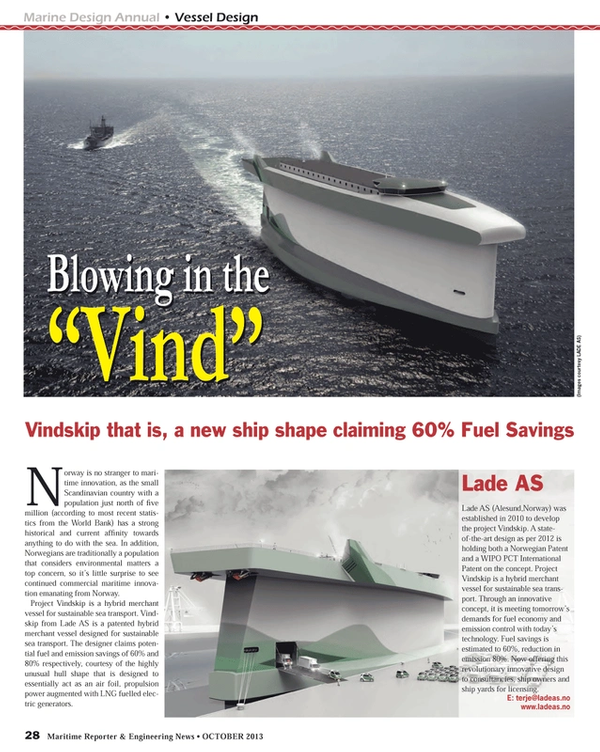 Read Blowing in the “Vind” in Pdf, Flash or Html5 edition of October 2013 Maritime Reporter