MARIN has upgraded two part task simulators into full tug simulators, which have  been used in training & studies for TOTAL, Port of Rotterdam, Meyer Werft and OLT Toscana, amongst others.

For years MARIN’s Nautical Center has made extensive use of full mission bridge simulators for nautical studies and training and for many of these simulations tugs play an important role. Although it is possible to use computer (or autopilot) controlled tugs, it is preferable to have the tug masters themselves control the tugs. This brings a high degree of realism to simulations and also importantly, the vast experience of the tug masters provides valuable input. Previously, MARIN had often used part task simulators but it took the decision to upgrade these to make the training as realistic as possible. The new tug simulators are a great step forward. Instead of sitting in a room with a ‘one-screen visual image’, the tug captain now steps onboard a real vessel. With 270 degrees of projected visual scenery and a large TV screen for the view astern, the tug captain is provided with the same view as he has from his own tugboat. This includes a good view abeam, which is a great help in estimating the tug speed.

More Realistic
To make it feel even more realistic, much attention was paid to the consoles and the simulators are equipped with professional helmsmen NorSap chairs. The newly developed hi-tech consoles, which have flexible controls, allow the tug stations to be converted from ASD tugs to a conventional or Voith Schneider configuration within minutes. The controls and read-outs are generic and self-explanatory, making them ideal to simulate different ship types. As well as tugs, they can also be used to simulate inland waterway vessels or coasters for example.
The first feedback MARIN has received from the tug masters using the new stations was highly enthusiastic. As well as improving the experience of the tug masters, this upgrade makes dedicated tug training possible and MARIN can now improve the realism of other simulations as well. 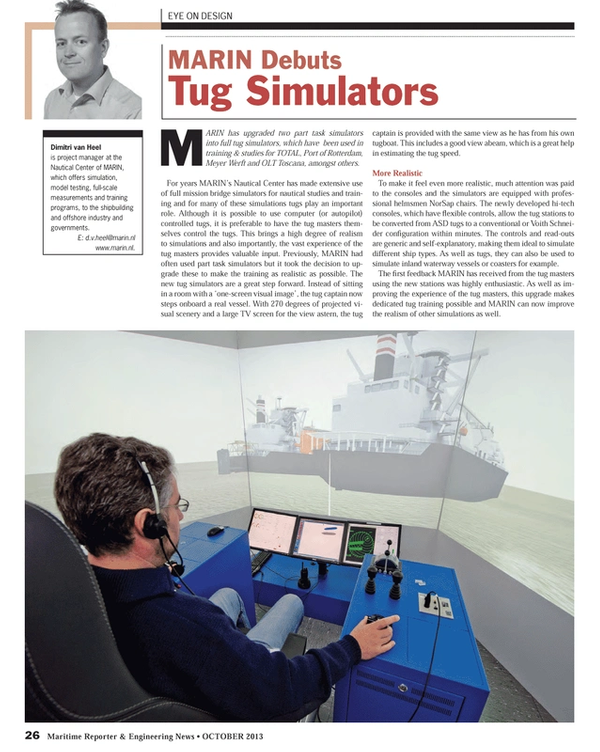