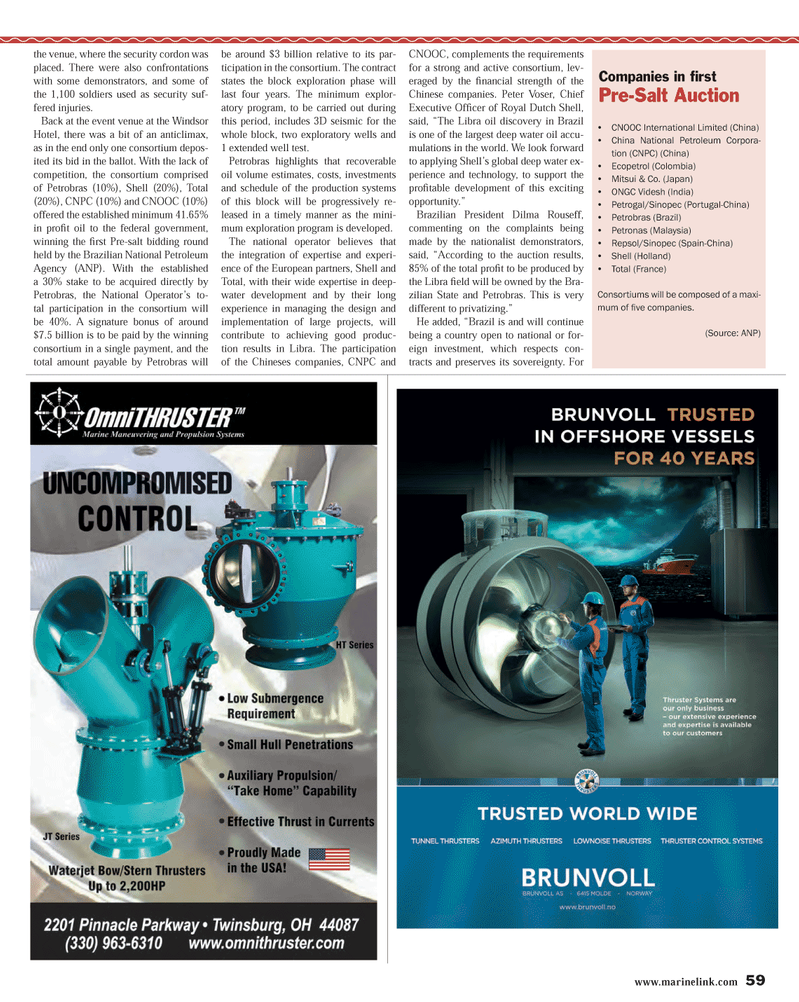 www.marinelink.com 59the venue, where the security cordon was placed. There were also confrontations with some demonstrators, and some of the 1,100 soldiers used as security suf-fered injuries.Back at the event venue at the Windsor Hotel, there was a bit of an anticlimax, as in the end only one consortium depos-ited its bid in the ballot. With the lack of competition, the consortium comprised of Petrobras (10%), Shell (20%), Total (20%), CNPC (10%) and CNOOC (10%) offered the established minimum 41.65% in proÞ t oil to the federal government, winning the Þ rst Pre-salt bidding round held by the Brazilian National Petroleum Agency (ANP). With the established a 30% stake to be acquired directly by Petrobras, the National Operator?s to- tal participation in the consortium will be 40%. A signature bonus of around $7.5 billion is to be paid by the winning consortium in a single payment, and the total amount payable by Petrobras will be around $3 billion relative to its par- ticipation in the consortium. The contract states the block exploration phase will last four years. The minimum explor- atory program, to be carried out during this period, includes 3D seismic for the whole block, two exploratory wells and 1 extended well test. Petrobras highlights that recoverable oil volume estimates, costs, investments and schedule of the production systems of this block will be progressively re-leased in a timely manner as the mini-mum exploration program is developed.The national operator believes that the integration of expertise and experi-ence of the European partners, Shell and Total, with their wide expertise in deep- water development and by their long experience in managing the design and implementation of large projects, will contribute to achieving good produc-tion results in Libra. The participation of the Chineses companies, CNPC and CNOOC, complements the requirements for a strong and active consortium, lev-eraged by the Þ nancial strength of the Chinese companies. Peter Voser, Chief Executive OfÞ cer of Royal Dutch Shell, said, ?The Libra oil discovery in Brazil is one of the largest deep water oil accu- mulations in the world. We look forward to applying Shell?s global deep water ex- perience and technology, to support the proÞ table development of this exciting opportunity.? Brazilian President Dilma Rouseff, commenting on the complaints being made by the nationalist demonstrators, said, ?According to the auction results, 85% of the total proÞ t to be produced by the Libra Þ eld will be owned by the Bra- zilian State and Petrobras. This is very different to privatizing.? He added, ?Brazil is and will continue being a country open to national or for- eign investment, which respects con-tracts and preserves its sovereignty. For Companies in Þ rst Pre-Salt Auction ? CNOOC International Limited (China) ? China National Petroleum Corpora- tion (CNPC) (China)? Ecopetrol (Colombia) ? Mitsui & Co. (Japan) ? ONGC Videsh (India) ? Petrogal/Sinopec (Portugal-China) ? Petrobras (Brazil) ? Petronas (Malaysia) ? Repsol/Sinopec (Spain-China) ? Shell (Holland) ? Total (France) Consortiums will be composed of a maxi- mum of Þ ve companies. (Source: ANP) MR #11 (58-65).indd 59MR #11 (58-65).indd 5911/13/2013 11:13:48 AM11/13/2013 11:13:48 AM