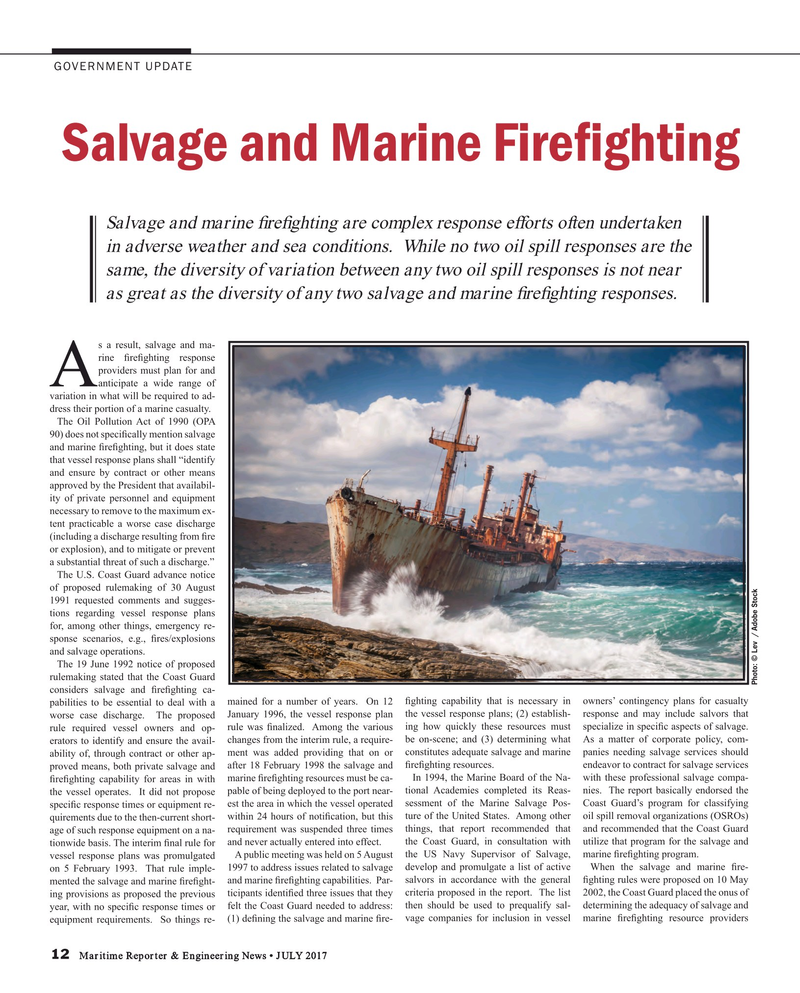 Aanticipate a wide range of variation in what will be required to ad- dress their portion of a marine casualty.

The Oil Pollution Act of 1990 (OPA 90) does not speci? cally mention salvage and marine ? re? ghting, but it does state that vessel response plans shall “identify and ensure by contract or other means approved by the President that availabil- ity of private personnel and equipment necessary to remove to the maximum ex- tent practicable a worse case discharge (including a discharge resulting from ? re or explosion), and to mitigate or prevent a substantial threat of such a discharge.”

The U.S. Coast Guard advance notice of proposed rulemaking of 30 August 1991 requested comments and sugges- tions regarding vessel response plans for, among other things, emergency re- sponse scenarios, e.g., ? res/explosions and salvage operations.

Photo: © Lev / Adobe Stock considers salvage and ? re? ghting ca- pabilities to be essential to deal with a mained for a number of years. On 12 ? ghting capability that is necessary in owners’ contingency plans for casualty worse case discharge. The proposed January 1996, the vessel response plan the vessel response plans; (2) establish- response and may include salvors that rule was ? nalized. Among the various ing how quickly these resources must specialize in speci? c aspects of salvage. rule required vessel owners and op- erators to identify and ensure the avail- changes from the interim rule, a require- be on-scene; and (3) determining what As a matter of corporate policy, com- ment was added providing that on or constitutes adequate salvage and marine panies needing salvage services should ability of, through contract or other ap- proved means, both private salvage and after 18 February 1998 the salvage and ? re? ghting resources. endeavor to contract for salvage services ? re? ghting capability for areas in with marine ? re? ghting resources must be ca- In 1994, the Marine Board of the Na- with these professional salvage compa- the vessel operates. It did not propose pable of being deployed to the port near- tional Academies completed its Reas- nies. The report basically endorsed the est the area in which the vessel operated sessment of the Marine Salvage Pos- Coast Guard’s program for classifying speci? c response times or equipment re- within 24 hours of noti? cation, but this ture of the United States. Among other oil spill removal organizations (OSROs) quirements due to the then-current short- requirement was suspended three times things, that report recommended that and recommended that the Coast Guard age of such response equipment on a na- tionwide basis. The interim ? nal rule for and never actually entered into effect. the Coast Guard, in consultation with utilize that program for the salvage and