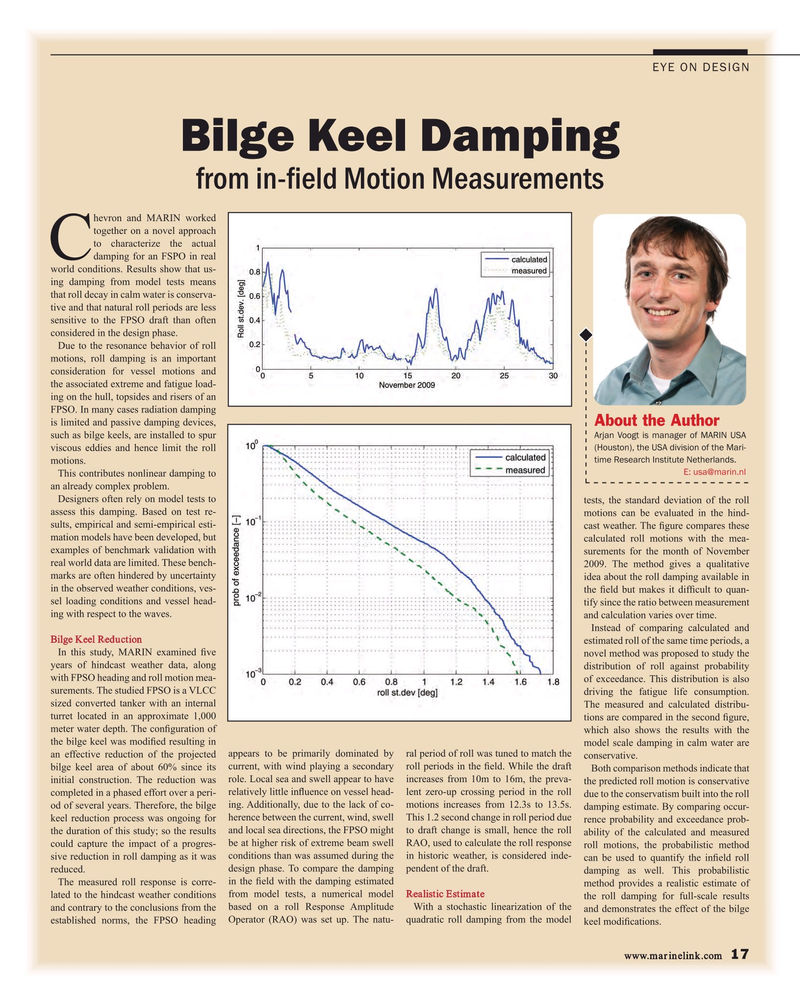 Bilge Keel Damping from in-? eld Motion Measurements hevron and MARIN worked together on a novel approach to characterize the actual

Cdamping for an FSPO in real world conditions. Results show that us- ing damping from model tests means that roll decay in calm water is conserva- tive and that natural roll periods are less sensitive to the FPSO draft than often considered in the design phase.

Due to the resonance behavior of roll motions, roll damping is an important consideration for vessel motions and the associated extreme and fatigue load- ing on the hull, topsides and risers of an

FPSO. In many cases radiation damping is limited and passive damping devices,

Arjan Voogt is manager of MARIN USA such as bilge keels, are installed to spur (Houston), the USA division of the Mari- viscous eddies and hence limit the roll time Research Institute Netherlands. motions.

This contributes nonlinear damping to an already complex problem.

Designers often rely on model tests to tests, the standard deviation of the roll assess this damping. Based on test re- motions can be evaluated in the hind- sults, empirical and semi-empirical esti- cast weather. The ? gure compares these mation models have been developed, but calculated roll motions with the mea- examples of benchmark validation with surements for the month of November real world data are limited. These bench- 2009. The method gives a qualitative marks are often hindered by uncertainty idea about the roll damping available in in the observed weather conditions, ves- the ? eld but makes it dif? cult to quan- sel loading conditions and vessel head- tify since the ratio between measurement ing with respect to the waves.

and calculation varies over time.

Instead of comparing calculated and

In this study, MARIN examined ? ve novel method was proposed to study the years of hindcast weather data, along distribution of roll against probability with FPSO heading and roll motion mea- of exceedance. This distribution is also surements. The studied FPSO is a VLCC driving the fatigue life consumption. sized converted tanker with an internal

The measured and calculated distribu- turret located in an approximate 1,000 tions are compared in the second ? gure, meter water depth. The con? guration of which also shows the results with the the bilge keel was modi? ed resulting in model scale damping in calm water are an effective reduction of the projected appears to be primarily dominated by ral period of roll was tuned to match the conservative.

bilge keel area of about 60% since its current, with wind playing a secondary roll periods in the ? eld. While the draft

Both comparison methods indicate that initial construction. The reduction was role. Local sea and swell appear to have increases from 10m to 16m, the preva- the predicted roll motion is conservative lent zero-up crossing period in the roll due to the conservatism built into the roll completed in a phased effort over a peri- relatively little in? uence on vessel head- motions increases from 12.3s to 13.5s. damping estimate. By comparing occur- od of several years. Therefore, the bilge ing. Additionally, due to the lack of co- keel reduction process was ongoing for herence between the current, wind, swell This 1.2 second change in roll period due rence probability and exceedance prob- the duration of this study; so the results and local sea directions, the FPSO might to draft change is small, hence the roll ability of the calculated and measured be at higher risk of extreme beam swell RAO, used to calculate the roll response roll motions, the probabilistic method could capture the impact of a progres- sive reduction in roll damping as it was conditions than was assumed during the in historic weather, is considered inde- can be used to quantify the in? eld roll reduced. design phase. To compare the damping pendent of the draft.

damping as well. This probabilistic

The measured roll response is corre- in the ? eld with the damping estimated method provides a realistic estimate of lated to the hindcast weather conditions from model tests, a numerical model Realistic Estimate the roll damping for full-scale results

With a stochastic linearization of the and demonstrates the effect of the bilge and contrary to the conclusions from the based on a roll Response Amplitude quadratic roll damping from the model keel modi? cations.

established norms, the FPSO heading Operator (RAO) was set up. The natu- www.marinelink.com 17