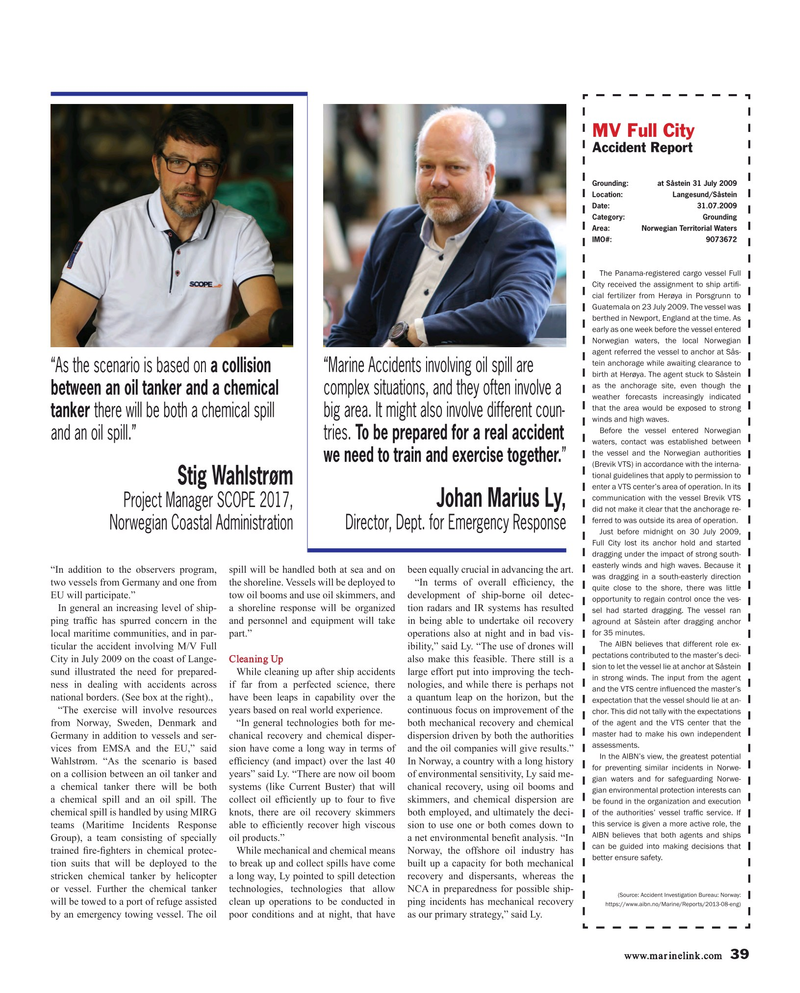 City received the assignment to ship arti? - cial fertilizer from Herøya in Porsgrunn to

Guatemala on 23 July 2009. The vessel was berthed in Newport, England at the time. As early as one week before the vessel entered

Norwegian waters, the local Norwegian agent referred the vessel to anchor at Sås- tein anchorage while awaiting clearance to “As the scenario is based on a collision “Marine Accidents involving oil spill are birth at Herøya. The agent stuck to Såstein as the anchorage site, even though the between an oil tanker and a chemical complex situations, and they often involve a weather forecasts increasingly indicated that the area would be exposed to strong tanker there will be both a chemical spill big area. It might also involve different coun- winds and high waves.

Before the vessel entered Norwegian and an oil spill.” tries. To be prepared for a real accident waters, contact was established between the vessel and the Norwegian authorities we need to train and exercise together.” (Brevik VTS) in accordance with the interna- tional guidelines that apply to permission to

Stig Wahlstrøm enter a VTS center’s area of operation. In its communication with the vessel Brevik VTS

Project Manager SCOPE 2017, did not make it clear that the anchorage re- ferred to was outside its area of operation.

Full City lost its anchor hold and started dragging under the impact of strong south- easterly winds and high waves. Because it “In addition to the observers program, spill will be handled both at sea and on been equally crucial in advancing the art.

was dragging in a south-easterly direction two vessels from Germany and one from the shoreline. Vessels will be deployed to “In terms of overall ef? ciency, the quite close to the shore, there was little

EU will participate.” tow oil booms and use oil skimmers, and development of ship-borne oil detec- opportunity to regain control once the ves-

In general an increasing level of ship- a shoreline response will be organized tion radars and IR systems has resulted sel had started dragging. The vessel ran ping traf? c has spurred concern in the and personnel and equipment will take in being able to undertake oil recovery aground at Såstein after dragging anchor for 35 minutes.

local maritime communities, and in par- part.” operations also at night and in bad vis-

The AIBN believes that different role ex- ticular the accident involving M/V Full ibility,” said Ly. “The use of drones will pectations contributed to the master’s deci-

City in July 2009 on the coast of Lange- Cleaning Up also make this feasible. There still is a sion to let the vessel lie at anchor at Såstein sund illustrated the need for prepared- While cleaning up after ship accidents large effort put into improving the tech- in strong winds. The input from the agent ness in dealing with accidents across if far from a perfected science, there nologies, and while there is perhaps not and the VTS centre in? uenced the master’s national borders. (See box at the right)., have been leaps in capability over the a quantum leap on the horizon, but the expectation that the vessel should lie at an- “The exercise will involve resources years based on real world experience. continuous focus on improvement of the chor. This did not tally with the expectations of the agent and the VTS center that the from Norway, Sweden, Denmark and “In general technologies both for me- both mechanical recovery and chemical master had to make his own independent

Germany in addition to vessels and ser- chanical recovery and chemical disper- dispersion driven by both the authorities assessments.

vices from EMSA and the EU,” said sion have come a long way in terms of and the oil companies will give results.”

In the AIBN’s view, the greatest potential

Wahlstrøm. “As the scenario is based ef? ciency (and impact) over the last 40 In Norway, a country with a long history for preventing similar incidents in Norwe- on a collision between an oil tanker and years” said Ly. “There are now oil boom of environmental sensitivity, Ly said me- gian waters and for safeguarding Norwe- a chemical tanker there will be both systems (like Current Buster) that will chanical recovery, using oil booms and gian environmental protection interests can a chemical spill and an oil spill. The collect oil ef? ciently up to four to ? ve skimmers, and chemical dispersion are be found in the organization and execution of the authorities’ vessel traf? c service. If chemical spill is handled by using MIRG knots, there are oil recovery skimmers both employed, and ultimately the deci- this service is given a more active role, the teams (Maritime Incidents Response able to ef? ciently recover high viscous sion to use one or both comes down to

AIBN believes that both agents and ships

Group), a team consisting of specially oil products.” a net environmental bene? t analysis. “In can be guided into making decisions that trained ? re-? ghters in chemical protec- While mechanical and chemical means Norway, the offshore oil industry has better ensure safety. tion suits that will be deployed to the to break up and collect spills have come built up a capacity for both mechanical stricken chemical tanker by helicopter a long way, Ly pointed to spill detection recovery and dispersants, whereas the or vessel. Further the chemical tanker technologies, technologies that allow NCA in preparedness for possible ship- (Source: Accident Investigation Bureau: Norway: will be towed to a port of refuge assisted clean up operations to be conducted in ping incidents has mechanical recovery https://www.aibn.no/Marine/Reports/2013-08-eng) by an emergency towing vessel. The oil poor conditions and at night, that have as our primary strategy,” said Ly.