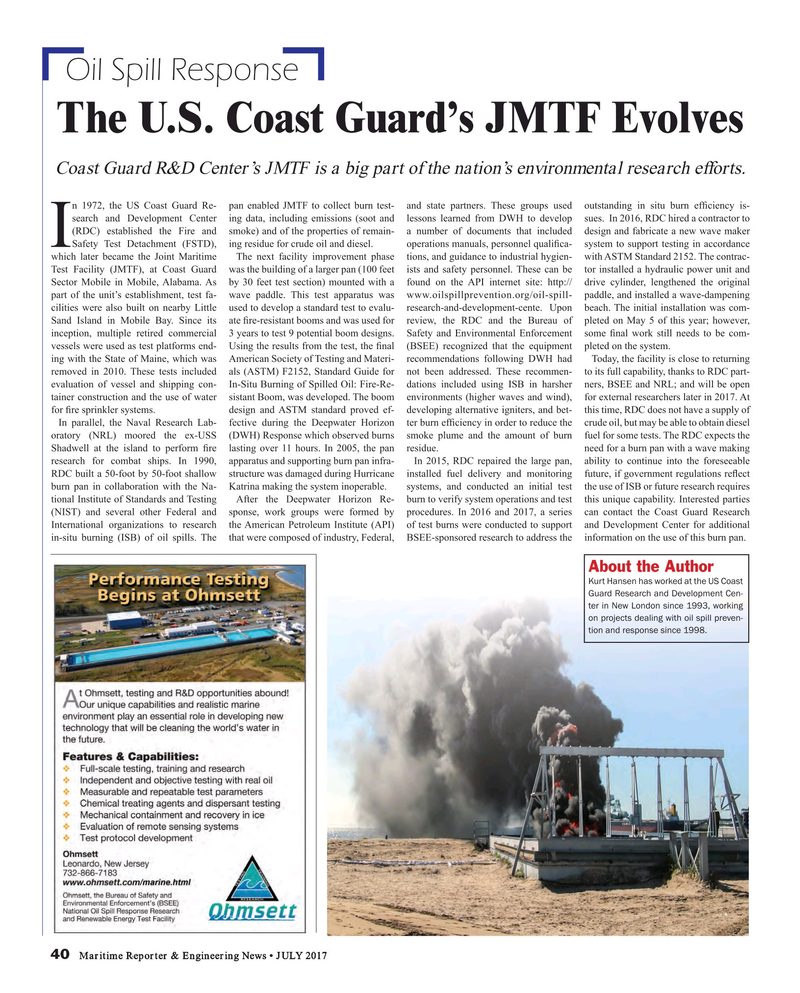 n 1972, the US Coast Guard Re- pan enabled JMTF to collect burn test- and state partners. These groups used outstanding in situ burn ef? ciency is- search and Development Center ing data, including emissions (soot and lessons learned from DWH to develop sues. In 2016, RDC hired a contractor to (RDC) established the Fire and smoke) and of the properties of remain- a number of documents that included design and fabricate a new wave maker

Test Facility (JMTF), at Coast Guard was the building of a larger pan (100 feet ists and safety personnel. These can be tor installed a hydraulic power unit and

Sector Mobile in Mobile, Alabama. As by 30 feet test section) mounted with a found on the API internet site: http:// drive cylinder, lengthened the original part of the unit’s establishment, test fa- wave paddle. This test apparatus was www.oilspillprevention.org/oil-spill- paddle, and installed a wave-dampening cilities were also built on nearby Little used to develop a standard test to evalu- research-and-development-cente. Upon beach. The initial installation was com-

Sand Island in Mobile Bay. Since its ate ? re-resistant booms and was used for review, the RDC and the Bureau of pleted on May 5 of this year; however, inception, multiple retired commercial 3 years to test 9 potential boom designs. Safety and Environmental Enforcement some ? nal work still needs to be com- vessels were used as test platforms end- Using the results from the test, the ? nal (BSEE) recognized that the equipment pleted on the system.

ing with the State of Maine, which was American Society of Testing and Materi- recommendations following DWH had Today, the facility is close to returning removed in 2010. These tests included als (ASTM) F2152, Standard Guide for not been addressed. These recommen- to its full capability, thanks to RDC part- evaluation of vessel and shipping con- In-Situ Burning of Spilled Oil: Fire-Re- dations included using ISB in harsher ners, BSEE and NRL; and will be open tainer construction and the use of water sistant Boom, was developed. The boom environments (higher waves and wind), for external researchers later in 2017. At for ? re sprinkler systems. design and ASTM standard proved ef- developing alternative igniters, and bet- this time, RDC does not have a supply of

In parallel, the Naval Research Lab- fective during the Deepwater Horizon ter burn ef? ciency in order to reduce the crude oil, but may be able to obtain diesel oratory (NRL) moored the ex-USS (DWH) Response which observed burns smoke plume and the amount of burn fuel for some tests. The RDC expects the

Shadwell at the island to perform ? re lasting over 11 hours. In 2005, the pan residue. need for a burn pan with a wave making research for combat ships. In 1990, apparatus and supporting burn pan infra- In 2015, RDC repaired the large pan, ability to continue into the foreseeable

RDC built a 50-foot by 50-foot shallow structure was damaged during Hurricane installed fuel delivery and monitoring future, if government regulations re? ect burn pan in collaboration with the Na- Katrina making the system inoperable. systems, and conducted an initial test the use of ISB or future research requires tional Institute of Standards and Testing After the Deepwater Horizon Re- burn to verify system operations and test this unique capability. Interested parties (NIST) and several other Federal and sponse, work groups were formed by procedures. In 2016 and 2017, a series can contact the Coast Guard Research

International organizations to research the American Petroleum Institute (API) of test burns were conducted to support and Development Center for additional in-situ burning (ISB) of oil spills. The that were composed of industry, Federal, BSEE-sponsored research to address the information on the use of this burn pan.

Kurt Hansen has worked at the US Coast