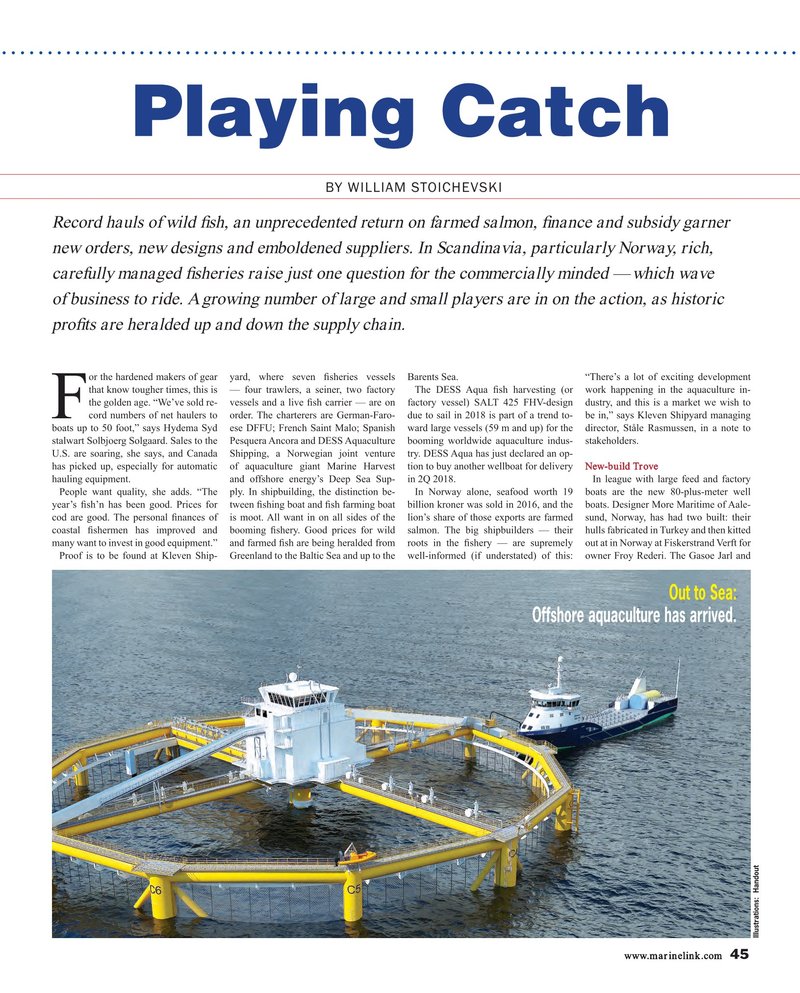 Record hauls of wild ? sh, an unprecedented return on farmed salmon, ? nance and subsidy garner new orders, new designs and emboldened suppliers. In Scandinavia, particularly Norway, rich, carefully managed ? sheries raise just one question for the commercially minded — which wave of business to ride. A growing number of large and small players are in on the action, as historic pro? ts are heralded up and down the supply chain. or the hardened makers of gear yard, where seven ? sheries vessels Barents Sea. “There’s a lot of exciting development that know tougher times, this is — four trawlers, a seiner, two factory The DESS Aqua ? sh harvesting (or work happening in the aquaculture in- the golden age. “We’ve sold re- vessels and a live ? sh carrier — are on factory vessel) SALT 425 FHV-design dustry, and this is a market we wish to

Fcord numbers of net haulers to order. The charterers are German-Faro- due to sail in 2018 is part of a trend to- be in,” says Kleven Shipyard managing boats up to 50 foot,” says Hydema Syd ese DFFU; French Saint Malo; Spanish ward large vessels (59 m and up) for the director, Ståle Rasmussen, in a note to stalwart Solbjoerg Solgaard. Sales to the Pesquera Ancora and DESS Aquaculture booming worldwide aquaculture indus- stakeholders.

U.S. are soaring, she says, and Canada Shipping, a Norwegian joint venture try. DESS Aqua has just declared an op- has picked up, especially for automatic of aquaculture giant Marine Harvest tion to buy another wellboat for delivery New-build Trove hauling equipment. and offshore energy’s Deep Sea Sup- in 2Q 2018. In league with large feed and factory

People want quality, she adds. “The ply. In shipbuilding, the distinction be- In Norway alone, seafood worth 19 boats are the new 80-plus-meter well year’s ? sh’n has been good. Prices for tween ? shing boat and ? sh farming boat billion kroner was sold in 2016, and the boats. Designer More Maritime of Aale- cod are good. The personal ? nances of is moot. All want in on all sides of the lion’s share of those exports are farmed sund, Norway, has had two built: their coastal ? shermen has improved and booming ? shery. Good prices for wild salmon. The big shipbuilders — their hulls fabricated in Turkey and then kitted many want to invest in good equipment.” and farmed ? sh are being heralded from roots in the ? shery — are supremely out at in Norway at Fiskerstrand Verft for

Proof is to be found at Kleven Ship- Greenland to the Baltic Sea and up to the well-informed (if understated) of this: owner Froy Rederi. The Gasoe Jarl and