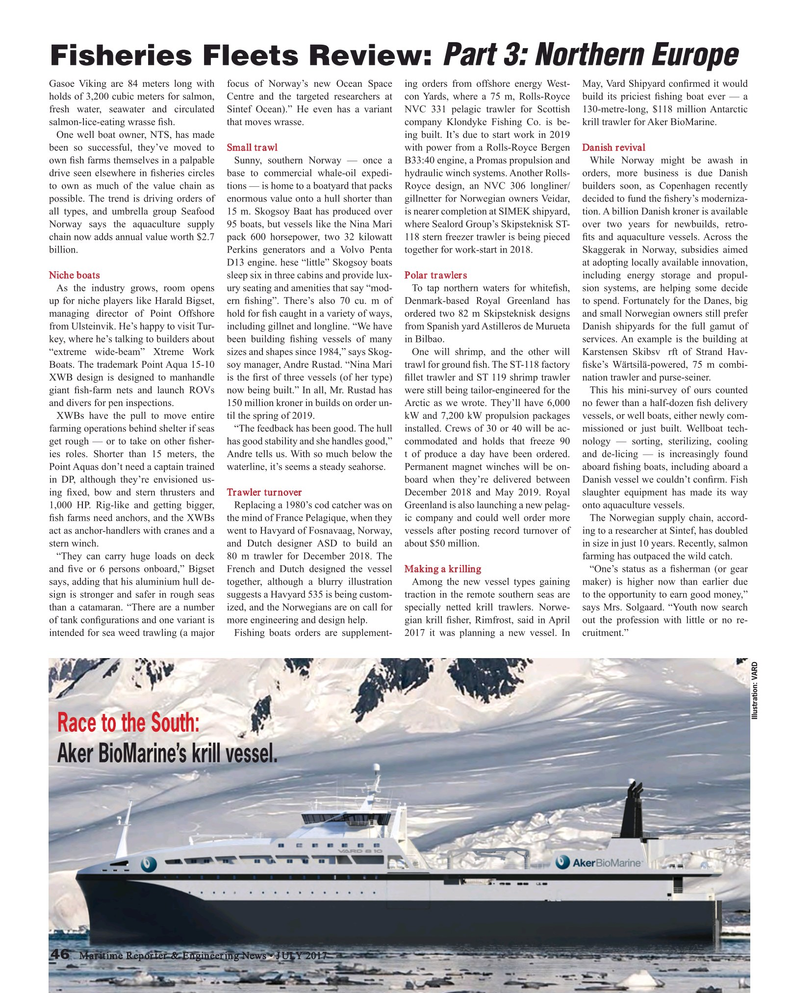 Gasoe Viking are 84 meters long with focus of Norway’s new Ocean Space ing orders from offshore energy West- May, Vard Shipyard con? rmed it would holds of 3,200 cubic meters for salmon, Centre and the targeted researchers at con Yards, where a 75 m, Rolls-Royce build its priciest ? shing boat ever — a fresh water, seawater and circulated Sintef Ocean).” He even has a variant NVC 331 pelagic trawler for Scottish 130-metre-long, $118 million Antarctic salmon-lice-eating wrasse ? sh. that moves wrasse. company Klondyke Fishing Co. is be- krill trawler for Aker BioMarine.

One well boat owner, NTS, has made ing built. It’s due to start work in 2019 been so successful, they’ve moved to Small trawl with power from a Rolls-Royce Bergen Danish revival own ? sh farms themselves in a palpable Sunny, southern Norway — once a B33:40 engine, a Promas propulsion and While Norway might be awash in drive seen elsewhere in ? sheries circles base to commercial whale-oil expedi- hydraulic winch systems. Another Rolls- orders, more business is due Danish to own as much of the value chain as tions — is home to a boatyard that packs Royce design, an NVC 306 longliner/ builders soon, as Copenhagen recently possible. The trend is driving orders of enormous value onto a hull shorter than gillnetter for Norwegian owners Veidar, decided to fund the ? shery’s moderniza- all types, and umbrella group Seafood 15 m. Skogsoy Baat has produced over is nearer completion at SIMEK shipyard, tion. A billion Danish kroner is available

Norway says the aquaculture supply 95 boats, but vessels like the Nina Mari where Sealord Group’s Skipsteknisk ST- over two years for newbuilds, retro- chain now adds annual value worth $2.7 pack 600 horsepower, two 32 kilowatt 118 stern freezer trawler is being pieced ? ts and aquaculture vessels. Across the billion. Perkins generators and a Volvo Penta together for work-start in 2018. Skaggerak in Norway, subsidies aimed

As the industry grows, room opens ury seating and amenities that say “mod- To tap northern waters for white? sh, sion systems, are helping some decide up for niche players like Harald Bigset, ern ? shing”. There’s also 70 cu. m of Denmark-based Royal Greenland has to spend. Fortunately for the Danes, big managing director of Point Offshore hold for ? sh caught in a variety of ways, ordered two 82 m Skipsteknisk designs and small Norwegian owners still prefer from Ulsteinvik. He’s happy to visit Tur- including gillnet and longline. “We have from Spanish yard Astilleros de Murueta Danish shipyards for the full gamut of key, where he’s talking to builders about been building ? shing vessels of many in Bilbao. services. An example is the building at “extreme wide-beam” Xtreme Work sizes and shapes since 1984,” says Skog- One will shrimp, and the other will Karstensen Skibsv