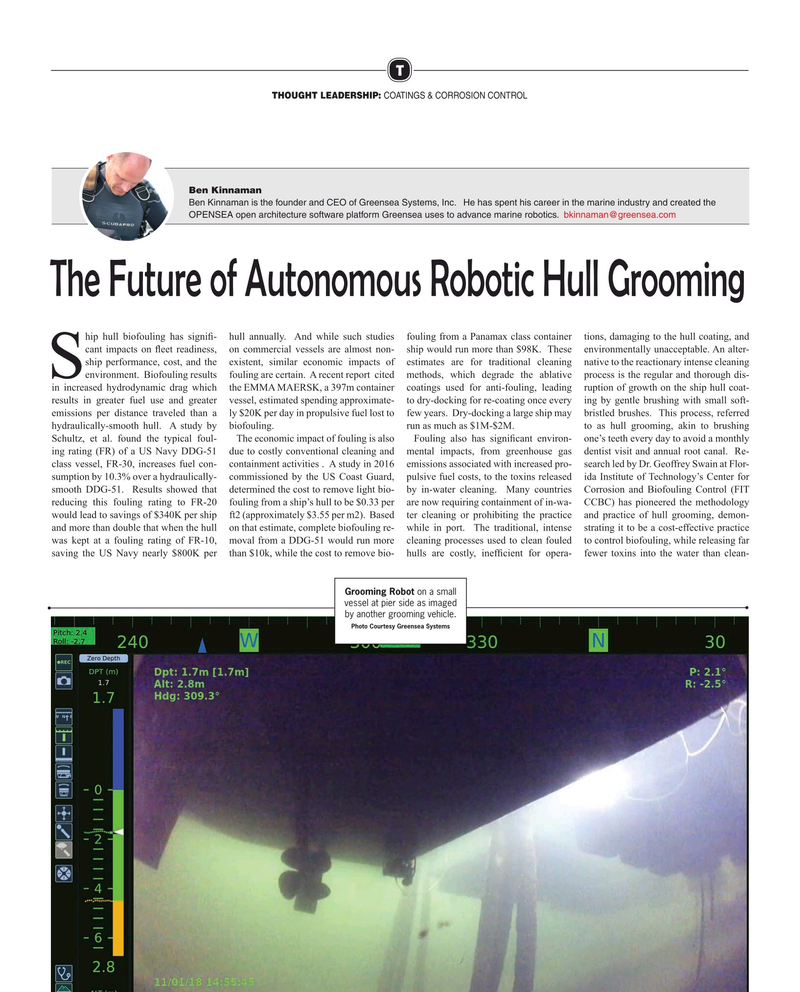 Ben Kinnaman is the founder and CEO of Greensea Systems, Inc. He has spent his career in the marine industry and created the

The Future of Autonomous Robotic Hull Grooming hip hull biofouling has signi? - hull annually. And while such studies fouling from a Panamax class container tions, damaging to the hull coating, and cant impacts on ? eet readiness, on commercial vessels are almost non- ship would run more than $98K. These environmentally unacceptable. An alter- ship performance, cost, and the existent, similar economic impacts of estimates are for traditional cleaning native to the reactionary intense cleaning

Senvironment. Biofouling results fouling are certain. A recent report cited methods, which degrade the ablative process is the regular and thorough dis- in increased hydrodynamic drag which the EMMA MAERSK, a 397m container coatings used for anti-fouling, leading ruption of growth on the ship hull coat- results in greater fuel use and greater vessel, estimated spending approximate- to dry-docking for re-coating once every ing by gentle brushing with small soft- emissions per distance traveled than a ly $20K per day in propulsive fuel lost to few years. Dry-docking a large ship may bristled brushes. This process, referred hydraulically-smooth hull. A study by biofouling. run as much as $1M-$2M. to as hull grooming, akin to brushing

Schultz, et al. found the typical foul- The economic impact of fouling is also Fouling also has signi? cant environ- one’s teeth every day to avoid a monthly ing rating (FR) of a US Navy DDG-51 due to costly conventional cleaning and mental impacts, from greenhouse gas dentist visit and annual root canal. Re- class vessel, FR-30, increases fuel con- containment activities . A study in 2016 emissions associated with increased pro- search led by Dr. Geoffrey Swain at Flor- sumption by 10.3% over a hydraulically- commissioned by the US Coast Guard, pulsive fuel costs, to the toxins released ida Institute of Technology’s Center for smooth DDG-51. Results showed that determined the cost to remove light bio- by in-water cleaning. Many countries Corrosion and Biofouling Control (FIT reducing this fouling rating to FR-20 fouling from a ship’s hull to be $0.33 per are now requiring containment of in-wa- CCBC) has pioneered the methodology would lead to savings of $340K per ship ft2 (approximately $3.55 per m2). Based ter cleaning or prohibiting the practice and practice of hull grooming, demon- and more than double that when the hull on that estimate, complete biofouling re- while in port. The traditional, intense strating it to be a cost-effective practice was kept at a fouling rating of FR-10, moval from a DDG-51 would run more cleaning processes used to clean fouled to control biofouling, while releasing far saving the US Navy nearly $800K per than $10k, while the cost to remove bio- hulls are costly, inef? cient for opera- fewer toxins into the water than clean-

Grooming Robot on a small vessel at pier side as imaged by another grooming vehicle.