It is hard to get past headlines painting the portrait of a world besieged physically and economically by a medical crisis on a global scale and a nation that has turned the national spotlight onto the fundamentals of its constitutional democracy, including the persistence of racism, the right to protest and the character of local and national security forces in the United States. Lost in this this mass media reporting is a story worth a more detailed examination for it may portend a revolutionary change for modern naval warfare – advancing NATO’s maritime situational awareness and understanding resiliency through commercially available space-based assets.

On Saturday, May 30, 2020, SpaceX’s Crew Dragon spacecraft carried NASA astronauts Doug Hurley and Bob Behnken into orbit for a rendezvous with the International Space Station.  Of national significance was the fact that the Crew Dragon launched astronauts from U.S. soil for the first time since the last Shuttle flight in 2011.  The real point to hone, however, is that the SpaceX Crew Dragon spacecraft is the first to be designed, built and launched to space by a private entity.  That’s an accomplishment only three nations — the U.S., Russia and China — have achieved previously. “A private company has just achieved a feat that heretofore has only been achieved by nation-states.” As CNBC reported it, “The launch unlocks the possibility of a new era of sustained, private, commercial activity in space.”

A very natural extension of the significance of CNBC’s statement is to ask “what impact will commercialization have on space-based military applications such as Intelligence, Surveillance, Reconnaissance (ISR)”.  A celestial vantage point, as the ultimate high ground for overwatch, offers significant potential for satisfying a fundamental tenet of naval warfare - Maritime Situational Awareness (MDA).  Having a clear picture and access to timely, relevant information is essential as it enables the early identification of potential threats and enhances appropriate responses.   Information superiority through high quality MSA enables naval warfare commanders at all levels – tactical through strategic – to get inside their adversaries’ OODA Loop.

The OODA loop was a tool developed by military strategist John Boyd to explain how individuals and organizations can win in uncertain and chaotic environments.   The ability to get inside your adversary’s decision cycle of Observe, Orient, Decide, Act creates a Gordian Knot of threatening events and generates mismatches between what an adversary expects you to do and what you actually do.  This makes your adversary feel trapped in an unpredictable world of doubt, mistrust, confusion, disorder, fear, panic and chaos.  As former Commandant of the Marine Corps, General Charles C. Krulak stated in his analysis of the Gulf War that “The Iraqi army collapsed morally and intellectually under the onslaught of American and Coalition forces.  John Boyd was an architect of that victory as surely as if he’d commanded a fighter wing or a maneuver division in the desert.”

Click Here to Register for the 2020 Maritime Risk Symposium

When naval warfare operators think of ISR, for many, minds are often immediately drawn to modern day, advanced technological capabilities – low orbit earth observation or military communications satellites rapidly passing large data sets which ultimately result in operational outputs such as coordinated surface and subsurface TLAM strikes on shore based targets or providing high resolution imagery to assist with ship and submarine movements.  In reality, it is actually a system of systems that make up the space based ISR toolbox.

It is undeniable that NATO’s joint maritime operations rely on space support provided by satellites, such as Satellite Communications (SatCom), Position, Navigation and Timing (PNT), and Intelligence, Surveillance and Reconnaissance (ISR), as a critical mission enablers.  The services of ISR systems, in particular, have become more and more essential to NATO’s decision-making and planning processes as the Alliance continues to project deterrence based on strength, readiness and speed of response with our Command and Control.

Some defense planners envision a future battlefield in which the ground is crawling with robots and the skies are darkened by drones.  Swarms of unmanned systems would dominate in the battle for an ISR advantage.  In reality, the issue of quantity versus quality when it comes to next-generation ISR is yet to be resolved.  This is particularly the case in contested environments where targets are mobile or hidden, defenses have proliferated, a drone’s guidance systems can be jammed and networks compromised.  In such a world, more sophisticated platforms deploying multiple sensors of greater range and acuity and carrying defensive and even offensive capabilities may make more sense.

It is widely agreed that as civilization entered the “Age of Information,” but a couple of decades ago, militaries have seen ISR capabilities expanding in the air, land, maritime, space and cyberspace domains, across what has been called ‘today’s knowledge-based environment.’  Although one could of course, easily argue that acting on knowledge is absolutely nothing new, it is also just as easy to argue that the complexity and the sheer volume of data and information management that indeed makes this the ‘Age of Information”.  Thus, we now find the ‘knowledge-based environment’ in which today’s modern navies must operate. 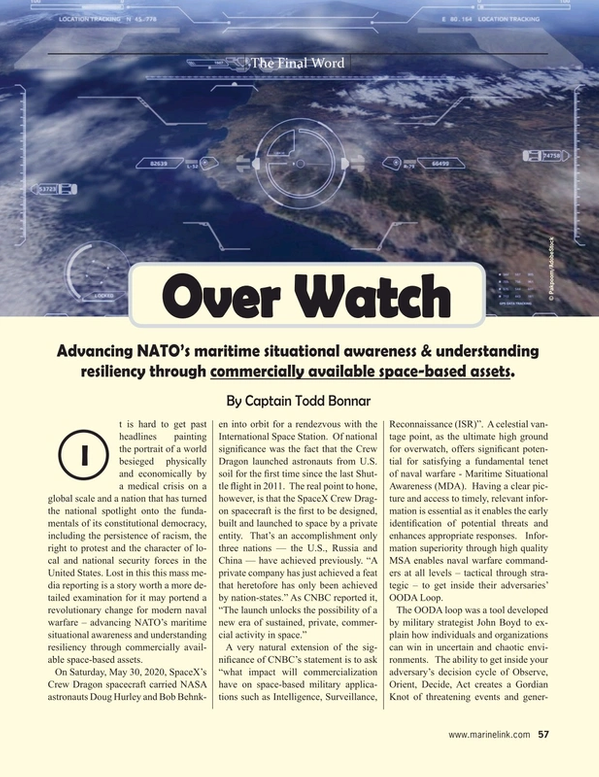